Card Of The Week August 9 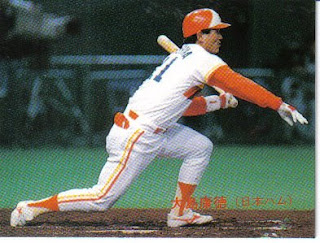 The above is the 1989 Calbee card (#197) of Yasunori Oshima of the Nippon Ham Fighters. The article about him in Baseball Reference's Bullpen Wiki states that he was the oldest player in NPB History at the time of his retirement in 1994. Now I want to start off here by saying that the guy who's been writing the Japanese baseball player biographies for Baseball Reference is Mischa Gelman and he knows way more about Japanese baseball than I do. His primary source for the article is Gary Garland's fantastic Japan Baseball Daily and Gary Garland knows way more about Japanese baseball than I do also. So I'm a little uncomfortable here saying that I don't think this is right.

Yasunori Oshima (or Ohshima) was born on October 16, 1950. His last appearance at least for the ichi-gun team was in 1994. I'm going to make the assumption that that last game in 1994 was before his birthday (which is not unreasonable given that the Nippon Series that year started on October 22). That would make him 43 and at least a half at the time of last appearance. Gary Garland's bio claims that he was 46 at the time of his retirement. That could only be if he played a few years only at the ni-gun level. I don't think that happened as there are no cards of him as a player after 1994 and both Mischa and Gary Garland say (along with Gary Engel and Rob Fitts' "Japanese Baseball SuperStars") that he became an announcer for NHK from 1995 to 1999 (after which he was named Fighters manager). (To be completely accurate here, Engel & Fitts say he became an announcer, but don't give the time period and Gary Garland's article actually says 1985-89, which I assume is a typo.)

OK, so it looks like he was 43+ when he retired. Had there been any older players in NBP History before that? Well, yes. There's an odd Hall Of Famer named Shinji Namazaki (or Namasaki) who pitched in 1950 at the age of 48. (He's odd because he made his NPB debut in 1947 at age 45!)

So while I hesitate to say it, I think Mischa and Gary Garland are wrong.
Posted by NPB Card Guy at 8:56 PM

Thanks for noting the probable error(s) on my bio of Yasunori Oshima at the BR Bullpen. My source for these facts was Mr. Garland's usually-reliable site. I'll remove the claims for now and email Gary to find out what his source was.

Mischa, should I have just edited the wiki? I was reluctant to because I figured that it was more likely that I misunderstood something than you and/or Gary Garland were wrong...

Anybody can edit the BR Bullpen wiki. Feel free to contribute. I may have misread something Gary wrote though. I emailed him to see if that is the case.

Mr. Garland posted a correction to his site and I have corrected things at the Bullpen. Thanks again for finding this error.