Searching for Senichi Hoshino, Part One

This post is going to be a little different than most of my posts. I was reading the SimCentral.net blog the other day and learned that former Dragons pitcher and manager, Tigers manager and 2008 Japanese Olympic baseball team manager Senichi Hoshino was heading to the US to support the Japanese team in the Cal Ripken World Series. Since the Cal Ripken World Series is played at the Ripken Sports Complex in Aberdeen, MD which is maybe five miles from my house, I thought that this might be an opportunity to see if I could get an autograph. (Note - I'm really not much of an autograph guy, but when an opportunity presents itself, I try to take advantage. And how often do I get an opportunity to get an autograph from an OB star from Japan?)

So yesterday afternoon, after digging up a couple of cards for him to autograph, I headed over to see the Japanese team take on the team from Mexico and hopefully find Hoshino.

The fields at the Ripken Sports Complex are modeled after classic Major League parks. There's a Fenway with a high left field wall, a Wrigley with ivy on the outfield wall, a Memorial Stadium replica, a Yankee stadium (that I didn't get a good look at) and a miniature Camden Yards. The Camden Yards replica has real seats and an electronic scoreboard - the rest of the fields are pretty low tech - I think only the Yankee Stadium replica has lights. The other fields also don't have seats, just grassy embankments.

The Japan/Mexico game was at the Memorial Stadium replica. There was a nice little crowd watching the game, but unfortunately, I didn't find Hoshino. I did, however, see an exciting little game. Japan took a 2 run lead in the bottom of the first. Mexico loaded the bases in the top of the second with nobody out, but failed to score. The score remained unchanged until the top of fourth, when Mexico got a three run home run. In the bottom of the fifth, Japan answered back with their own two run home run, a towering blast to center. In the top of the sixth (the final inning as they only play six inning games), Japan quickly retired the first two batters. The third batter hit a fly ball to center that the center fielder dropped. The next batter hit a liner to left that got by the left fielder and rolled to the wall. The runner on first was sent by the third base coach. The throw from the left fielder was relayed by the shortstop and just barely made it to the catcher in time. There was a nice collision at home plate, the catcher held onto the ball and Japan won 4-3.

I took a bunch of pictures during the game. The team had their own Oendan section (I'm assuming that these are family of the players, of course). I've got a video clip of them as well, but I'm not sure how to post it: 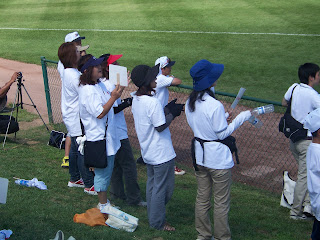 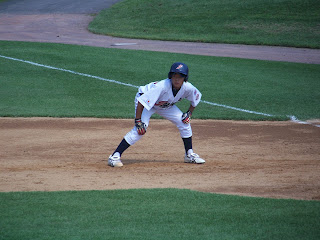 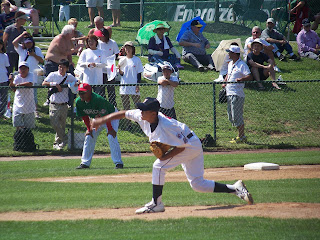 I liked the kid watching the game over the outfield fence: 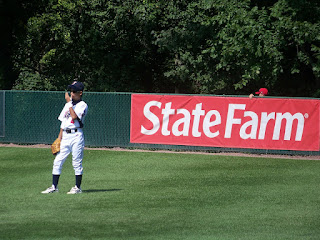 Hmm, I've seen this stance by a player wearing number one before somewhere...: 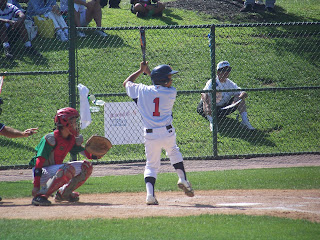 Manager Koji Okumura (I think) with the Oendan section behind him: 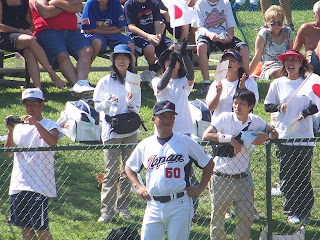 More random player shots. Look how much taller the Mexican player is than the first baseman. (The kids are all 11 and 12 I think): 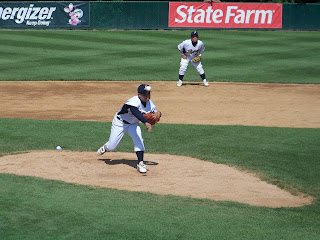 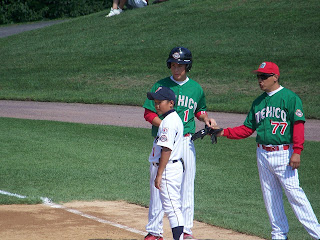 Mobbing the player who hit the three run home run: 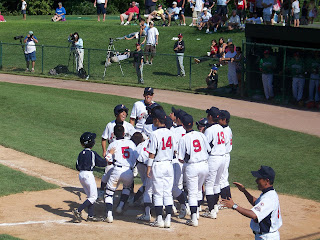 After the game, the team lined up and bowed to the crowd: 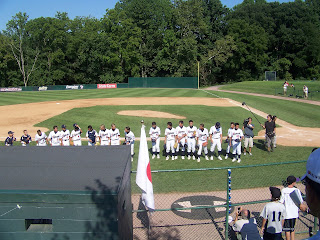 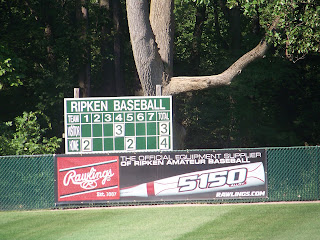 While Japan was playing Mexico, the Korean team was clobbering the Canadian team over at the Wrigley field replica (note the ivy on the fence): 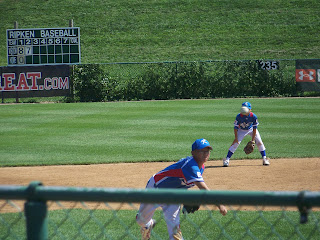 So tonight, the Japanese team plays the Canadian team over at the Camden Yards replica. I'll be heading over again to see if Hoshino shows up at this game.
Posted by NPB Card Guy at 4:59 PM