Card Of The Week May 5

The Reiwa Era began last Wednesday and the first player to hit a home run in the new era was Hayato Sakamoto of the Giants, who hit a solo shot off Daisuke Yamai of the Dragons in the second inning of their game that day.  I kind of view Sakamoto as the NPB equivalent of Derek Jeter in that he plays the glamour position for the most storied team in the league (much as it pains me to admit) so of course Sakamoto was going to hit the first Reiwa home run.

I have an odd card of Sakamoto to share this week.  It's a promo card from Bandai for the 2011 Owners League 02 set.  Here's the front and back of it: 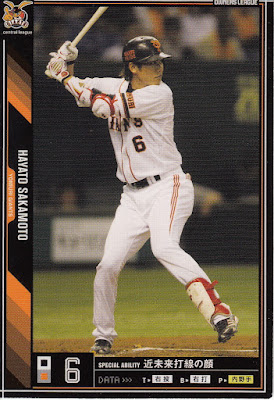 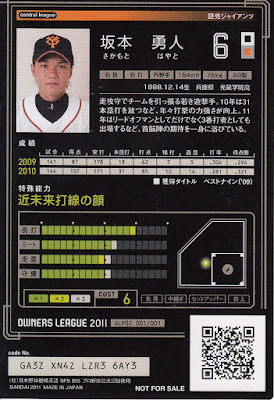 UPDATE 5/7/19 - I had no idea but Ryan did - the OLP02 means it was the second Owners League Promo card, not that it was a promo for the "02" set from 2011.  He thinks it might have been some sort of redemption thing with Tokyo Metro where you'd get some sort of card of pamphlet stamped at several different Metro stations and redeem it for the promo card.
Posted by NPB Card Guy at 4:42 PM

The Sakamoto/Jeter comp fits, though I think Sakamoto would be a better owner.

Oh man, I had meant to make a joke about future Sakamoto running a team into the ground but I forgot!

I don't know if Sakamoto provides gift baskets for his one stands either so maybe we're forcing the comparison a little...

The OLP promo sets are numbered completely separately from the regular set. The first set of promos is OLP01, etc. they aren’t really promos of the set, but promotional cards from events of some type. Tokyo Metro has an OLP set, for example.