Card Of The Week September 1

I was at a couple Aberdeen Ironbirds games this past week when they were taking on the Brooklyn Cyclones.  Brooklyn is managed by former Mets star second baseman Edgardo Alfonzo.  Alfonzo played briefly for the Yomiuri Giants back in 2009.  This was several years after he last appeared in the majors in 2006 - he spent to two intervening years in the Mexican League and independent Atlantic League.  He signed with Yomiuri in mid-February of 2009, joining his old teammate from his Little League days in Venezuela - Alex Ramirez (in fact I wonder if Ramirez recruited him for the team).  He was in the Opening Day lineup for the Giants, hitting sixth between Seung-Yeop Lee and Shinnosuke Abe but at 35 his best playing days were behind him.  He hit .146 with two home runs and four RBI in 21 games before being banished to the farm team for the remainder of the season.  He was back in the Atlantic League in 2010 and announced his retirement at the end of 2012 after a couple years where he only played in the Venezuelan Winter League.

As you might expect there aren't many cards from Fonzie's time in Japan.  He signed too late to appear in BBM's 1st Version set that year but he was in the "1st Version Update" subset from the 2nd Version set (#880).  He also appeared in BBM's Giants team set that year (#G044).  He doesn't appear to have cards in any of the Calbee or Konami sets from that year or any of the Giants team issued sets (at least the ones that have checklists online at TradingCardDB.com).  I only have one of these cards - the 2nd Version one: 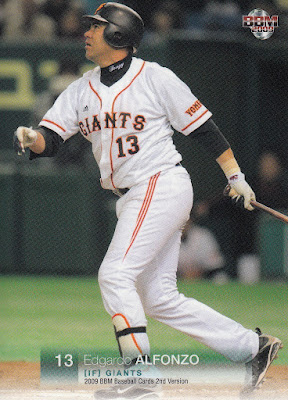