From time to time I have been asked if I have any other Japanese baseball memorabilia other than cards.  The answer is yes.  I decided to do a post showing some of them.

My sister and her husband spent a couple months living in Japan back in 1989 when my brother-in-law had a internship with Ricoh just after he got his doctorate and they brought me back a couple Japanese baseball trinkets.  They got me a Giants hat, the 1989 edition of Wayne Graczyk's annual Japanese Baseball guide and this item, which I think was intended to hang in a window. 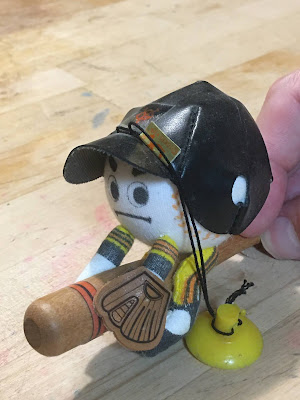 I picked these odd little stuffed toys up on Ebay years ago.  I think they were prizes in those arcade claw games but I don't know that for sure.  From top to bottom that's manager Katsuya Nomura, Atsuya Furuta and Katsumi Hirosawa. 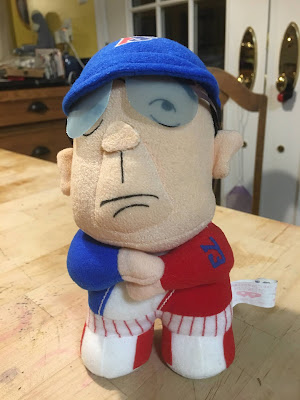 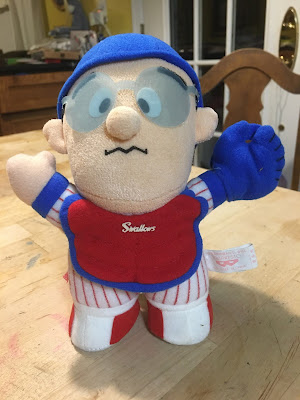 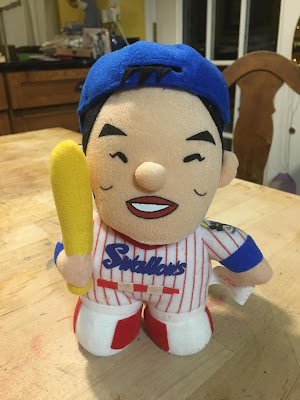 According to the tag on the toys there were five in all.  I think that the two I don't have are Takehiro Ikeyama and the Swallows mascot Tsubakuro. 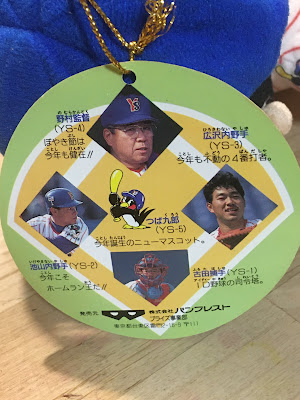 I think I picked up this Shigeo Nagashima figurine off of Ebay also.  I'm figuring it was issued in the 1990's as his uniform number is 33 which is the number he wore as Giants manager between 1993 and 1999.  I don't know any more details about it. 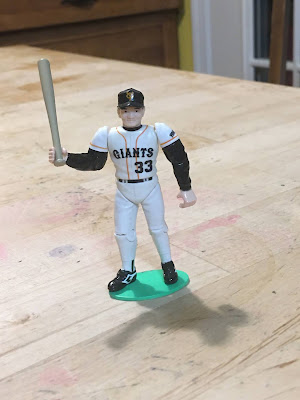 This Ichiro figurine was issued by Bandai around 2000.  There were several different versions - home or away uniform, different batting poses - and you didn't know which you were getting in the box.  I picked this up from the late, lamented Yakyu Shop probably at some point in 2001. 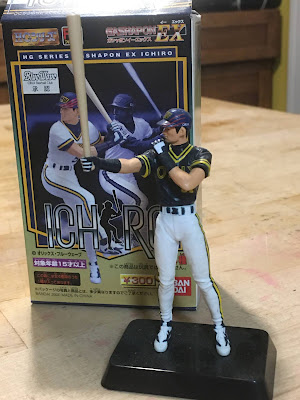 I figure this bobble head of Senichi Hoshino must have been issued during the two seasons he managed the Tigers (2002-03).  I got it off Ebay but I don't remember when.  It was probably sometime during the 00's.  I wish I had thought of getting it autographed when I got Hoshino's autograph on a card in 2010. 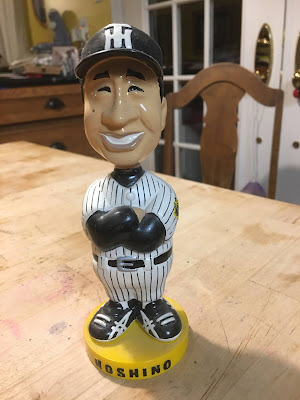 Ryan had sent me a bunch of these Shigeo Nagashima figurines that Epoch put out in 2007 or so.  Like the Bandai Ichiro figurines there were several different versions and you didn't know which one you were getting until you opened the box.  According to Ryan's post about them, there were eight different versions but really only three different poses.  The three poses are "kneeling", "helmet coming off while swinging" and "retirement speech".  All the ones I have show him in his home uniform but apparently there are versions of two of the poses wearing away uniforms (I suspect those are only the "kneeling" and "helmet coming off while swinging" poses).  There are also "secret" versions of each pose with a bright orange base.  I don't have any of those. 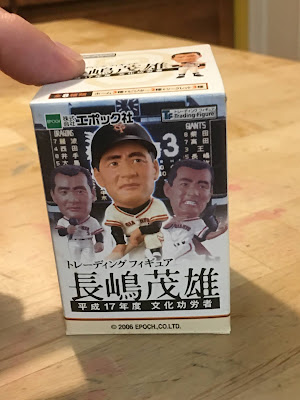 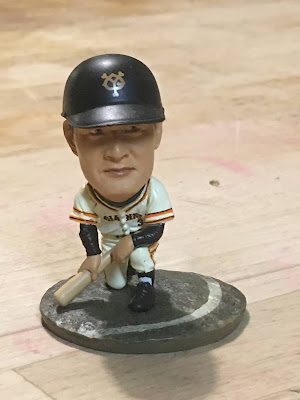 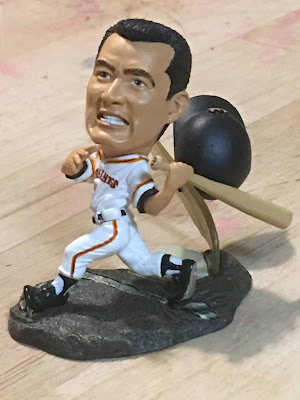 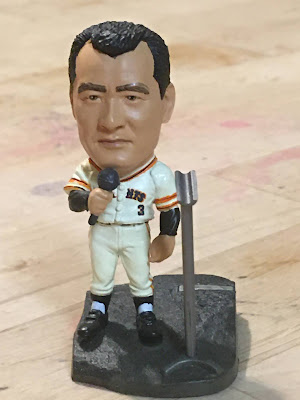 I feel kind of silly because Ryan sent me these a few years back and I didn't notice until tonight that the box had a little photo of the Korakuen Stadium scoreboard from Nagashima's retirement that you could cut out and attach on the back of the figurine to recreate the iconic image from that day. 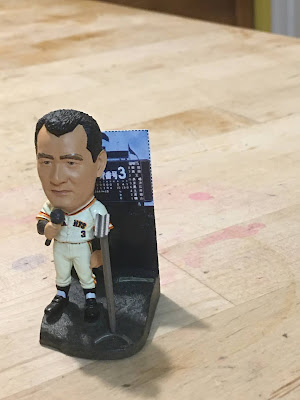 Jingu Stadium celebrated its 90th Anniversary in 2016 and the Swallows had a giveaway of a little stadium replica.  I picked this up off Yahoo! Japan Auctions through Noppin. 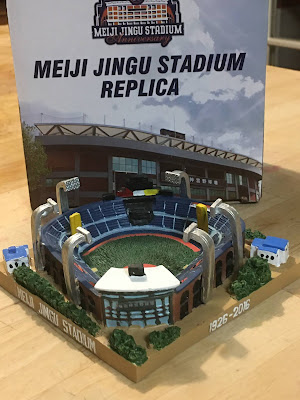 Deanna Rubin gave me this bobblehead of T-Okada when we met up at the World Baseball Classic finals in Los Angeles back in 2017. 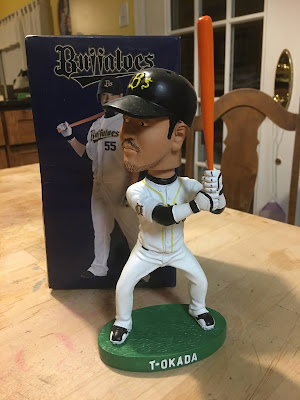 I have a couple of laminated sheets that are roughly 7 inches wide and 10 inches tall.  I'm not sure if these are considered shikishi or not.  One of them is for the 1999 Yokohama Baystars.  The front side shows a bunch of the stars for the team including Kazuhiro Sasaki, Daisuke Miura, Motonobu Tanishige, Takuro Ishii and Norihiro Komada.  The back shows head shots of the entire roster of the team.  I bought this on Ebay. 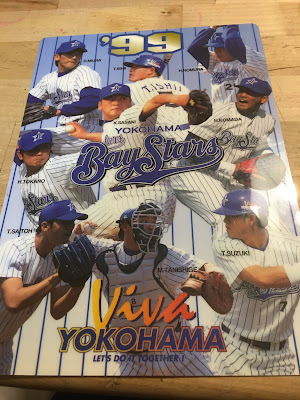 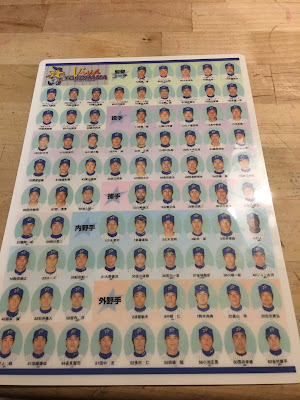 Hiro, the guy I used to buy most of my baseball card sets from, picked this up from the Sadaharu Oh museum in Fukuoka a few years back and sent it to me as a gift.  The back is blank except for the museum's logo. 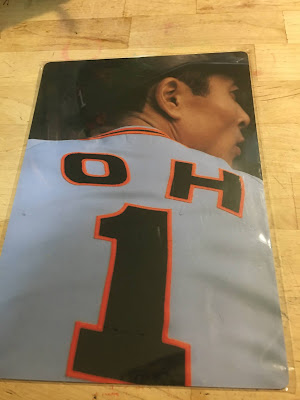 Great stuff. The facial expressions on those plush dolls are fantastic.