A couple weeks back, Alfonso Soriano of the Yankees got his 2000th career hit, making him eligible for the Meikyukai.  If you are surprised by this, you're not alone - Soriano himself was not aware that he was eligible or even what the Meikyukai was.  If you're confused by this, you might not be aware that like former Met Timo Perez, Soriano was originally signed out of the Dominican Republic by the Hiroshima Toyo Carp.  He appeared in 9 games for the Carp in 1997 and got two hits.  By the current rules of the Meikyukai, he is eligible for membership (and Andruw Jones is not) because he got his first hits in Japan.  I don't know if the Meikyukai has made an announcement or not about when or if they will be awarding Soriano his jacket.

As I said, former Met Timo Perez was also originally signed out of the Dominican by the Carp.  Perez actually had two Japanese baseball cards from the 1996 and 1998 BBM Diamond Heroes sets.  Soriano, on the other hand, has never had a Japanese card.

I've seen a lot of blogs that feature "Cards That Never Were" - pictures photoshopped into the designs of old baseball cards.  Some of them look quite good.  I've toyed with trying to do something similar, but I really don't have a lot of talent when it comes to photoshop.  I thought I'd try probably the simplest thing I could possibly do - a 1998 Calbee card of Soriano.  Unlike later years which included the set name and card number on the front, the 1998 Calbee cards simply had the name of the player and the team logo.  Here's a sample card of Akira Etoh (#081): 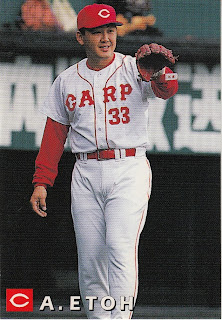 I took an image of Soriano from Sanspo, cropped it a little, added the Carp logo and his name (foreign players only had their last names listed in the 1998 Calbee set) and voila: 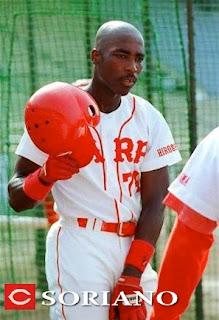 I didn't quite get the font right and considering that there was really only two things I needed to add to the picture, that's pretty bad.  But I don't think it's that bad for a first try.

If anyone wants to give me some pointers on how they create CTNW on their blogs, I'm all ears.  I'd love to try to create some cards using old Topps designs.
Posted by NPB Card Guy at 2:22 PM