Card Of The Week August 4

The Tohoku Rakuten Golden Eagles are on a tear right now.  They've won seven straight and have opened up a seven game lead over the Lions and Marines.  Part of the reason they're playing so well is that their ace pitcher, Masahiro Tanaka, has been on a tear as well.  Tanaka has won his first 15 decisions this year which is tied for the record for most wins to start a season.  He's also won his last 19 decisions going back to last year which is one short of the record for consecutive wins.  Not sure when his next start will be this week (Friday maybe?) but I'll try to get up early enough to catch some of it. 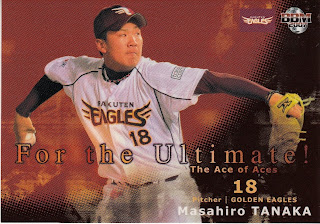