More Ohtani Rookies Plus Promos and Stadium Give Aways

I did a post a few months back on various Shohei Ohtani cards from 2013 - basically anything that could be considered a rookie card for him.  Most of the cards I mentioned in that post were base set cards since that's pretty much what I collect.  In the past few months I've fielded a number of questions about other Ohtani cards from the year and I've done some research on what's out there in the way of additional cards.

First of all, I generated a list of every card I could find for him from 2013.  I used SCM #116 for the BBM issues and #118 for the Calbee issues (including the card values).  The Bandai issue was listed in the Trading Card Database's listings for him.  I've linked to images of the cards where possible (mostly to Jambalaya).  The BBM sets are listed in the order they were issued.


I think that's about 64 cards in all.  This does not include a lot of the parallel versions.

I swiped an image from a Yahoo! Japan Auction for some of the inserts that I couldn't find a Jambalaya:


The Calbee Star cards have a gold signature parallel.  I got the image from another YJA auction:

Now let's get into the more interesting stuff.  I mentioned in my earlier post that Ohtani's first card appeared to be an promo of one of his Rookie Edition cards from SCM #97.  This turns out to not be the only promo version of this card.  There was a promo issued in Shukan Baseball issue #10 from 2013 that had a publication date of 2/20/13 (Shukan Baseball's issue numbers restart each year).  I don't have a copy of that card and I could not find an image of it.  However, there was another promo card for the set that was distributed at card shops.  The card I have is double sided with Tomoyuki Sugano on one side and Ohtani on the other.  I suspect that the promo set had 6 double sided cards in all that featured the 12 first round picks.  Here's the image of Ohtani's side:

It would not surprise me to discover that there's a "Book Shop" promo version of this card as well.

I am fairly certain that there is not a Shukan Baseball promo version of this card but again it would not surprise me to learn that there are "Card Shop" or "Book Store" promos of it.

The most interesting promo version of the card I've come across is one that was apparently done as part of a giveaway at the Fighter's minor league stadium in Kamagaya.  This is another two sided card with the image of the 1st Version card on the one side and a completely different picture on the other side: 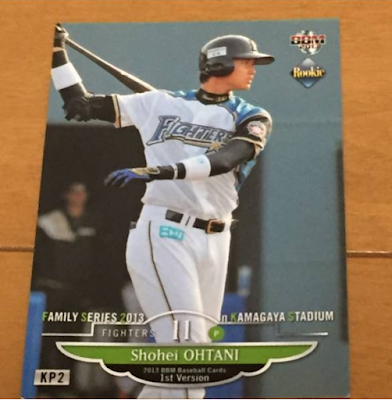 I don't know much more about this card than that.  From the card number on the back (KP2) I assume that there are more cards in the set (presumably for other players) but I don't know anything about them.

The only promos I've seen for any of his 2nd Version cards have been a "Book Store" version of his Cross Wind card: 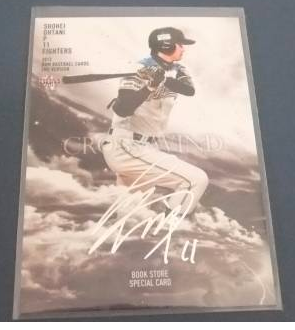 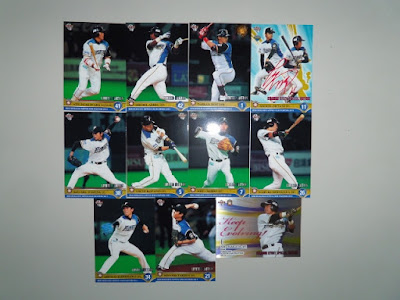 The Ohtani card is a composite of the two versions of his card in the set with a facsimile autograph: 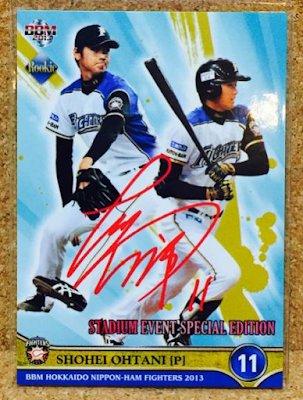 I've also come across a couple cards that appear to be team issued.  I don't know for sure if these were fan club cards or some sort of Stadium giveaway item.  The first card may have been a giveaway at Kamagaya as it shows the Fighters 2013 rookie class: 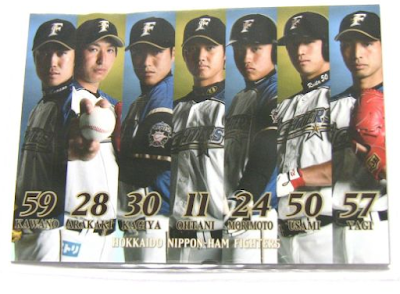 The other card is a card only of Ohtani.  Here's the front and back of it: 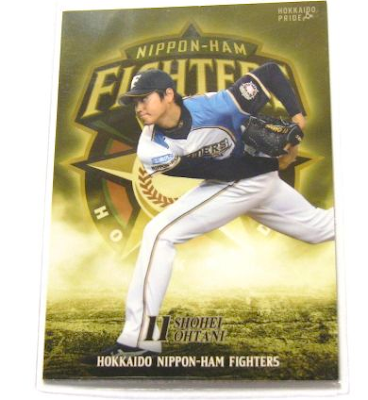 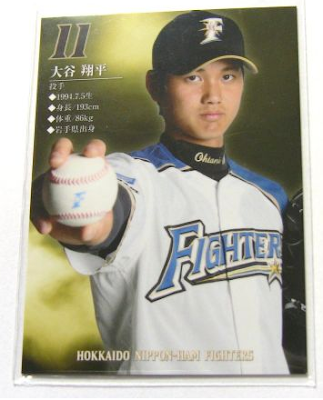 I want to stress that I don't own any of the cards shown in this post other than that "Card Shop" promo of the Rookie Edition card.  You can do your own searches for Ohtani cards at Yahoo! Japan Auctions by using this search.  If you find something you want to buy, I'd recommend using one of the Proxy Bidding companies that I've recommended in the past (Noppin, JAUCE or kuboTEN).

12/26 UPDATE: Just found another Promo version of 1st Version #183.  This was apparently a promo version available at an event at a stadium but I don't know if the stadium was Sapporo Dome or somewhere else: 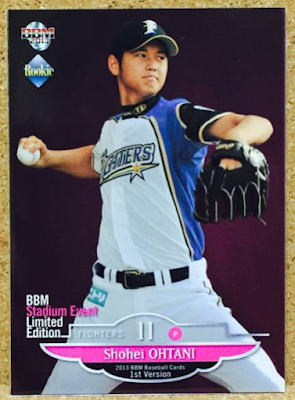 Great job on the list....Thanks