Hiroshi Arakawa has passed away at age 86.  Arakawa had had a nine year career as an outfielder with the Mainichi/Daimai Orions between 1953 and 1961 (he was an All Star in 1953) and managed Yakult for a couple years in the mid-1970's.  He is best known, however, for being the batting coach for the Giants in the 1960's that turned Sadaharu Oh into the home run hitter he became famous as.   He taught Oh the "flamingo" batting stance and incorporated martial arts into his training - including samurai-style swordsmanship.  Oh would train his wrists by slicing at a hanging strip of paper with his sword:

The sword, by the way, is in the Hall Of Fame: 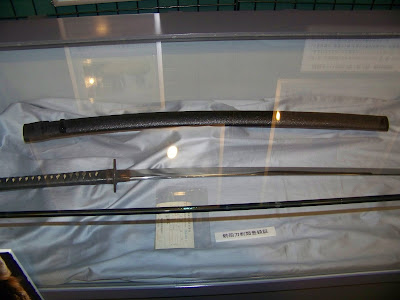 A Noburo Aota's Fan Notes did a very in depth post on Arakawa a few years back when he was named to the "Experts" ballot for the Hall Of Fame for the first time.  He was not voted in.

I've pointed out previously that Arakawa does not have very many cards.  In fact, I'm just going to share the two cards I have of him - one of which really isn't a card of him but does have him on it:


For good measure, here's a baseball card of Sadaharu Oh swinging the sword: