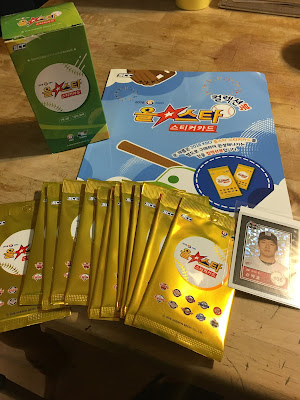 I had a nice surprise waiting for me when I got home from work on New Year's Eve -  Dan had sent me a package containing 14 packs of 2018 SCC KBO All Star stickers with the accompanying album.  This was a 218 "card" set put out by Daewon Media last summer (it was intended to be 220 cards but the cards of two Nexen players accused of sexual assault were removed from the set).  This was the second SCC set of 2018 and the first that actually was for the 2018 season - the first was a "catch-up set" for the 2017 season.

Despite the name of the set it is not a set for the KBO All Star game - you probably figured that out from the size of it.  There are 22 cards for each of the 10 KBO teams (with the exception of the previous mentioned Nexen which only has 20 due to the two cards being pulled).  At 2 1/4 by 3 inches the cards are a little smaller than the standard size.  If you pulled them off their backing the stickers themselves would be about 1 3/4 by 2 1/2 inches.  The photos are all head shots (mug shots really) and the backs have no biographical information (which makes sense since they are stickers that are intended to be put in an album).  Some of them are classified as "Rare" where the player's name and number are highlighted - I don't know if these are actually short printed or not.  There was a card distributed with the album that was "holo" but I think this was a parallel version as I got a non-holo version of the card in one of the packs.

There are supposedly three cards per pack but two of the packs Dan sent me actually had four cards in them so I got a total of 44 cards from the packs.  If you include the card that came in the album I have 45 cards total.  Nine of those were duplicates - including the "normal" version of the "holo" card I got with the album (Kang Baek-Ho).  That seems like a lot to me.  Dan says the collation for the set was terrible.  He had mentioned a friend buying something like 10 boxes (each box had 30 packs so at least 90 cards per box) but wasn't able to put together a complete set.

Here's what a couple of the cards look like:


I mentioned that the backs didn't have any biographical information.  What they do have is the one nod to the actual KBO All Star game.  Since all 10 teams are in a single league there's no natural way to split them up for the All Star game.  They are somewhat arbitrarily split into the "Dream" (Doosan, KT, Lotte, Samsung and SK) and "Nanum" (Hanwha, Kia, LG, NC and Nexen) teams.  The cards for the "Dream" teams have blue backs while the cards of the "Nanum" teams have pink backs: 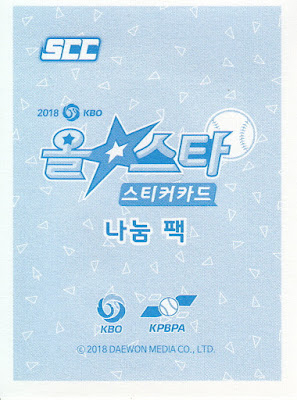 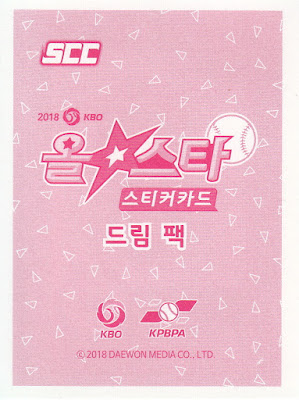 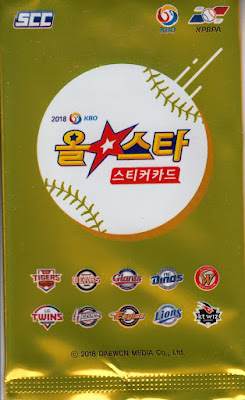 Here's the front cover of the album and a photo showing it open to a random page: 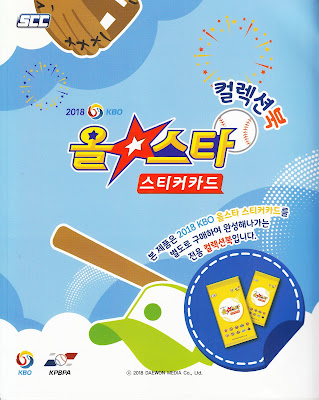 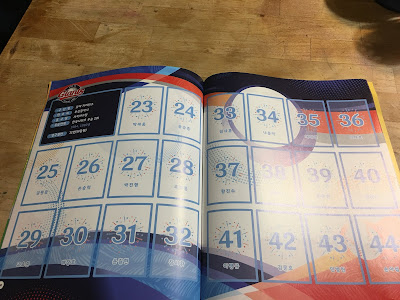 I really appreciate Dan getting me these packs but this really isn't a set that I'd recommend.  I personally am not a fan of "mug shot" sets and the decollation issues make this a very difficult set to complete.  I recommend the other SCC offerings from last year - the KBO Collection, the two KBO Collection 2 sets - the Red and the Black or the Premium set (which I didn't get) - rather than this set.  If you are more curious about this set, Dan's put the checklist up at TradingCardDatabase.com.

Thanks again for sending me the cards Dan!
Posted by NPB Card Guy at 1:58 PM

You're quite welcome. Just so your readers know, I sent the rest of the packs from the box to Justin, so it appears he will get the one holo (per box).

I find it appropriate that you pulled a Chang-Yong Lim of all people. And yes, I believe the rares are short-printed.