In April of this year a company called SCC (Sports Collector Card) issued the first official KBO set since the 2016-17 Black Edition set from SMG/Ntreev Duael back in early 2017.  Despite the set being issued this year it is considered a set for the 2017 season.  All the players in it were active in the KBO last season so none of the players who were in MLB in 2017 and returned to the KBO this season are included.  Also as usual no foreign players were included.

I had resisted buying any boxes of the set when it was released as it was priced just a bit higher than I was willing to spend on unopened KBO cards (I have a big vacation coming up in September so money's been a little tighter than usual this year).  But Dan Skrezyna managed to put together a complete base set for me and I got it in the mail last week.

The base set is 224 cards which is almost 100 cards largest than the largest base set from any of SMG's offerings.  For the first time in "modern" KBO card history (since SMG's first set in 2014) the cards are not split up evenly between all 10 teams.  Each team has anywhere between 20 and 24 cards.  The cards are numbered by team only.

I think the one drawback in issuing a set for 2017 in 2018 is that it apparently prevents players who retired at the end of last season (Lee Seung-Yuop) or switched teams in the offseaon (Choi Jeon-Suk) from being in the set.  I don't know enough about the KBO to know if there are any other glaring omissions in the player selection for the set.  It includes several players who have played in MLB and NPB like Lee Dae-Ho, Lim Chang-Yong, Kim Tae-Kyun and Lee Bum-Ho.  It also includes stars like Choi Jeong and Son Ah-Seop.

The cards themselves are fairly attractive.  I really like the fact that they have player's name in English on them.  They have a matte finish that reminds me of some of Fleer's issues from the mid to late 1990's.  The photos are all pretty attractive and feature a decent assortment of action shots.  Here's some examples:


It was kind of bothering me that the card design looked kind of familiar.  I finally figured it out yesterday - it's very similar to the 2016 Topps design: 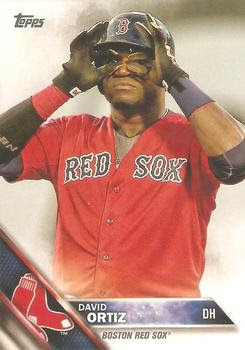 Dan did a post on the set back when it came out that details all the aspects of the set - parallels, autographs and memorabilia cards - as well as his card breakdown after opening four boxes.  He's also added all the base set cards and many of the other cards for the set over at TradingCardDB.com.

And I want to thank Dan for all his work in getting a base set together for me.  I really appreciate it!
Posted by NPB Card Guy at 10:13 AM