Card Of The Week July 1

The Lions were having a rough series against the Eagles this weekend.  Friday night the Eagles clobbered them 15-1 in a game in which Rakuten starter Takahiro Shiomi didn't give up a hit until the seventh.  On Saturday the Eagles trounced Seibu 9-1.  In today's game the Lions were leading 7-3 going into the eighth but the Lions bullpen coughed up three runs in the top of the eighth and another in the top of the ninth to allow the Eagles to tie the game up.  But with two outs in the bottom of the ninth, Lions outfielder Fumikazu Kimura launched a home run to straight away center field to win the game 8-7:


Kimura has a kind of odd history.  He was the first round high school draft pick of the Lions in 2006 out of Saitama Sakae High School as a pitcher.  He spent most of his first few years with the farm team.  The Lions sent him to play in both the Hawaiian Winter League (he played for West Oahu in the 2007-08 and 2008-09 seasons) and the Australian Baseball League (he was with the Melbourne Aces in the 2011-12 season).  He converted to being a position player during the 2012 season due to a back injury.   He's primarily used as a late inning defensive replacement.

Here's a card celebrating his first (and only) career pitching win in NPB from the 2012 BBM Lions set (#L77): 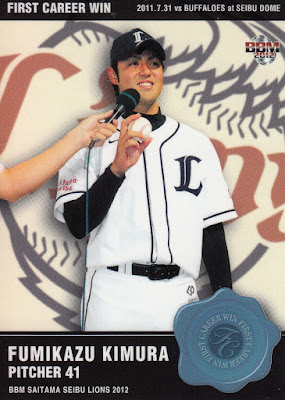