While I'm on the topic of KBO sets, there's a couple new and recently released items of note.

- Dan Skrezyna is issuing two new sets under his "Vittum" label.  The first is the next edition of his "Foreign Attack" set and features all the foreign players in the KBO last season (2017).  The set will have 39 cards in all - 37 cards of foreign players (and SK Wyverns manager Trey Hillman) plus a "League Leader" card and a checklist.  The other set is "KBO Home Run Kings" and features the top 10 home run leaders from 2017.  This set includes both foreign and Korean players.  The set has 11 cards - the ten players plus a checklist.  Both sets have a total print run of 25.  Dan tells me that he's only sold around half the sets so if you're interested, contact him via his website.  The cost is $25 for all 50 cards (not sure if that's just the US price or if overseas shipping would cost more).  The sets should be shipping soon.  The checklists for both sets (Foreign Attack and KBO Home Run Kings) are available at TradingCardDB.com although there are no card images loaded yet.  Like the SCC set, these are considered 2017 sets despite the fact that they're published in 2018.  Here's the sample images Dan provided: 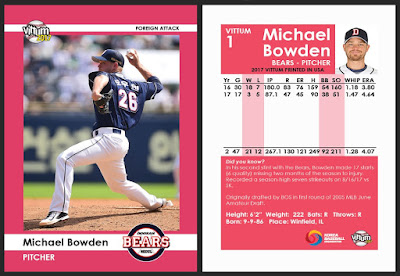 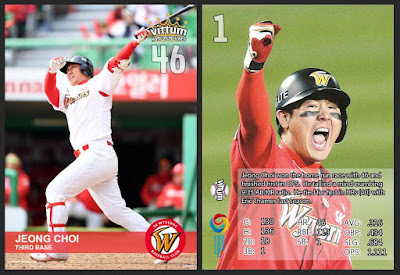 The other item is the latest release from SCC which has been out for a little but and it's a 2018 issue this time.  It's a 220 "card" sticker set called "KBO All Star Stickers".  There are 22 stickers per team with six stickers being either "RARE" (looks like they've got foil lettering) or "HOLO" (the usual "holographic" finish).  Each card features only a head shot of the player and the backs are all identical as there's a companion book that the stickers are meant to be put into.  This reminds quite a bit of the 2000 Epoch Pro Baseball NPB sticker set.  I'm not much for "mug shot" sets so I think I'm going to pass on this one.  Dan says he's heard the collation is terrible - he's knows someone who bought ten boxes but is still short some cards.  Not sure how many cards are in a box but that's got to be pretty frustrating.  The checklist (with images) is available at TradingCardDB.com.
Posted by NPB Card Guy at 3:26 PM