Card Of The Week August 25

There was an article in the Asahi Shimbun yesterday (H/T NPB Reddit) about how former Yokohama Baystars pitcher Atori Ohta is now a member of the Tokyo Metropolitan Police Department.  Ohta was a third round pick of the Baystars in the 2007 draft and was in their organization until 2015.  After the Baystars released him, he attended the 12 team tryout and eventually signed on with the Orix Buffaloes for the 2016 season as an ikusei player.  He moved onto the 70-man roster in June of that year and ended up making one appearance with the top team - pitching three innings against the Eagles in September.  That was his last appearance in NPB - Orix released him at the end of the season and he went back to the 12 team tryout.  According to the article at the tryout he saw brochures for joining the police force and other lines of work and he decided to become a police officer when all 12 teams passed on signing him (partly because his kids thought it'd be "cool").

One odd thing about Ohta's career - in November of 2015 it was reported in Nikkan Sports that he had signed a minor league deal with the San Diego Padres.  I actually did a post about it at the time.  But not only did he never play in the Padres organization, his name never appeared in the team's transaction list.  I'm not sure what happened - the next article in Nikkan Sports that mentions him is for him signing with the Buffaloes in January of 2016.  His Japanese wikipedia page appears to mention something about him trying out for both the Padres and Red Sox but I think it says that he failed the tryouts.  So maybe the Nikkan Sports was just wrong. 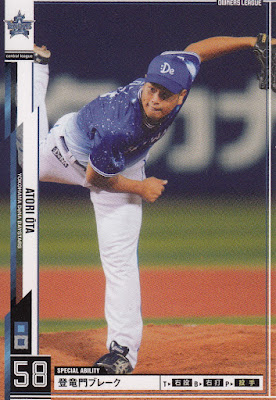 One of the most underappreciated greats.

If I recall correctly, when you and I were in Bits the owner talked about Uehara and said he still had a house in Maryland.