There are a lot of card shops in Japan but they aren't evenly distributed.  There are at least 20 in the Kanto region (including at least 12 in Tokyo) but I only know of about 12 that are outside of that area.  Osaka, the third most populous city in Japan after Tokyo and Yokohama, has only one shop that I know of - the Mint Umeda store.

Mint Umeda is located in the Hankyu Sanbangai Mall located just north of Umeda Station (and, yes, it's that Hankyu).  The store is in the north building of the mall on the B1 floor which is the first floor below ground level. 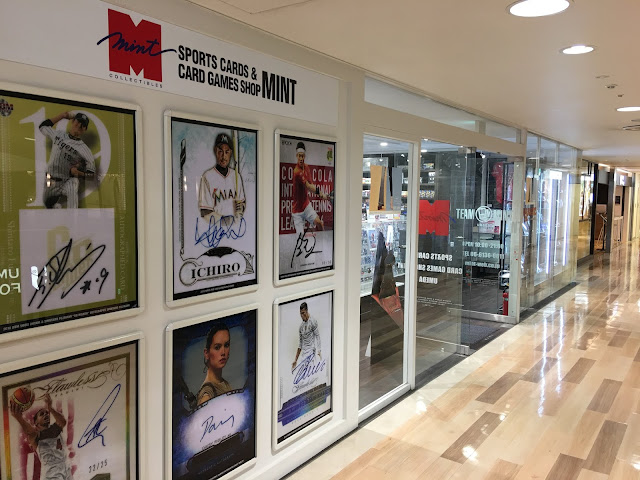 This is another one of Mint's "mall stores" and as such it strongly resembles their Shinjuku and Sendai stores that I had previously visited although it's a little bigger than each of them.  Much of what the store stocks is recent cards - both as unopened boxes and packs and as singles.  The display cases on the walls of the store contain the more expensive cards - autograph and memorabilia cards as well as rare parallels.  This store also had a bunch of Calbee and Nippon-Ham cards from the 1970's in one of the display cases.  This is not a store that I would recommend doing set building at due to their relatively recent inventory and the fact that their singles are priced at 100 yen a card. 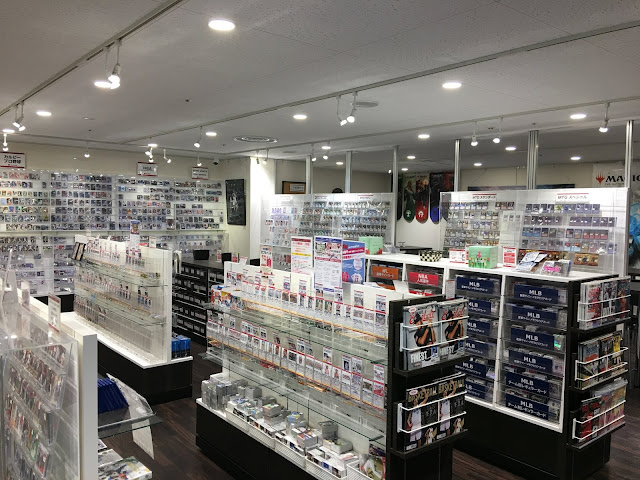 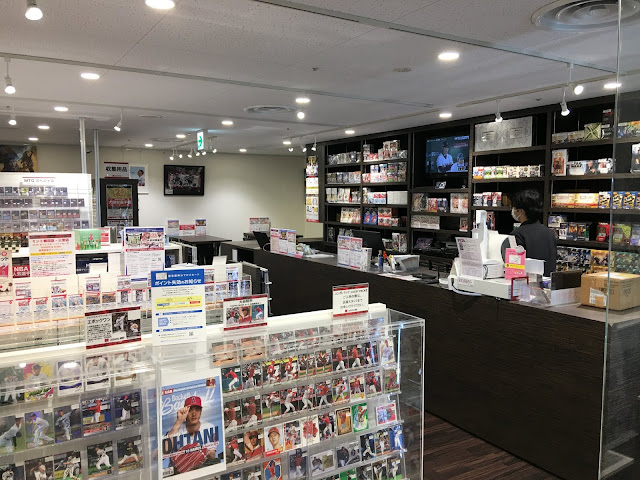 I wasn't really expecting to find much I was interested in here but I discovered a bunch of oddball cards on one of the shelves and spent awhile going through them.  I ended up picking up a bunch of team issued cards from Orix and Kintetsu, a couple of the Epoch-Kabaya Central League gum cards from 2016 and a 1998 Calbee CD card.  I ended up spending 4600 yen here.  In addition to the cards I picked up that oddball shelf also included some NST cards from the 1970's and some of Calbee's oversized cards from the early 1990's. 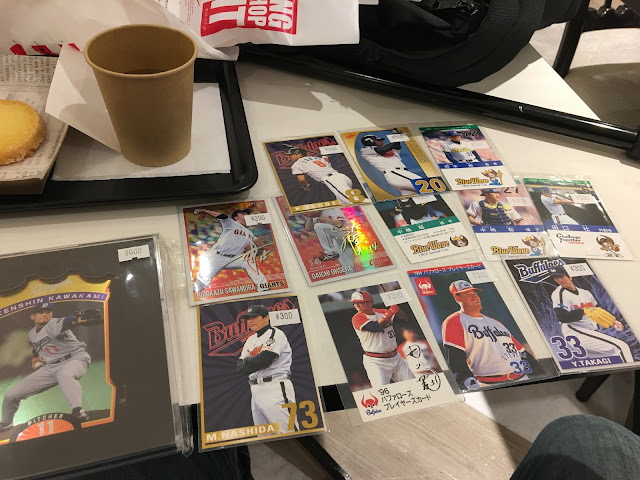 The store sells a lot of gaming cards including "Magic - The Gathering".  It has a bunch of tables set up for people to play on.

Here's a map showing the location of the store.  Note that while the location marked is where the store is, it's not on the floor that's displayed on the map.  So don't expect to find a Tully's Coffee or a Taco Bell nearby.  The store is on the floor BELOW the one shown.

I know that it's not an uncommon sight over there, but I don't know if I could ever get used to seeing so many folks walking around wearing surgical masks.

If you're in it for merely the base cards or parallels, this shop won't have much for you. But if you're in it for the hits like I am, then this place is kind of a God-send because they have the cheapest prices among the Mint stores (which isn't saying much when the prices are already too high but still counts for something). A whopping $15 (1,500 yen) per scrub BBM/EPOCH auto.

@Zippy Zappy - So what are the prices for a scrub BBM/Epoch autograph at other Mint stores?

@Jon & @NPB Card Guy - It's a cultural thing. The Japanese are known to emphasis cleanliness and the masks are there to prevent germs from spreading via coughs or sneezes. It's also a great way to keep your face warm in the dead of winter.

@NPBCG - Enough to make you pass on them. I usually go with Bits anyway for cheap scrubs since they're better than any of the Mints (believe it or not).