I met up with Sean in Nagoya and we went to a couple card shops.  Our first stop was Sports Card BITS! which was conveniently located just a few blocks away from the hotel I was staying in.

The store is located on the second floor of what Sean describes as "a massive 1970s vintage apartment complex with retail stores and restaurants on the first two floors."  It's actually conveniently located just next to the external staircase that's on the north side of the building.  It's pretty much on top of a Coco Ichibanya curry restaurant.  Once you go up the stairs the store is right in front of you: 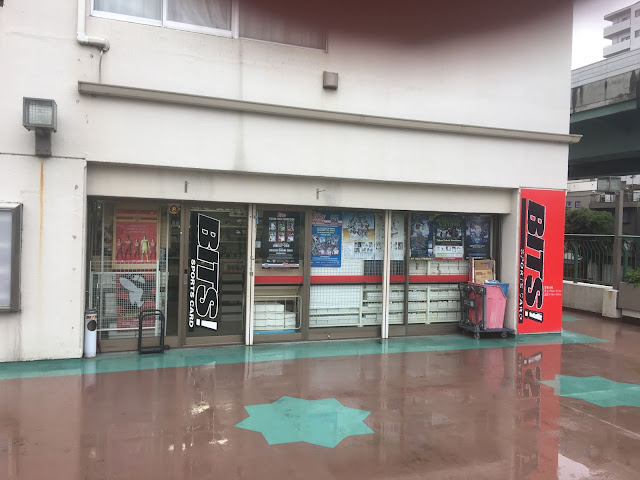 This is another store that's really good for set building.  They have a lot of BBM singles going back to the 1990's.  Ryan says that they sell most common singles for 50 yen a piece.  One thing to keep in mind when looking through the commons is that not only are they organized by team rather than card number but the Dragons cards are in a separate set of boxes.  The store is understandably very Dragon-centric as it was the only store that I saw any Dragons team issued cards - I'm not saying the other stores in Nagoya don't have them but they weren't as easy to find as they were here.

Beyond the BBM cards and Dragons team issued cards (which is specifically what I was looking for here) Sean was able to find some Calbee cards from the 1980's.  They weren't out with the rest of the cards but the owners brought them out when Sean asked about them.

The couple that own the store were very friendly and helpful.  The husband brought out a stool for me to sit on while I was going through the BBM singles.

Here's some photos of the inside of the store: 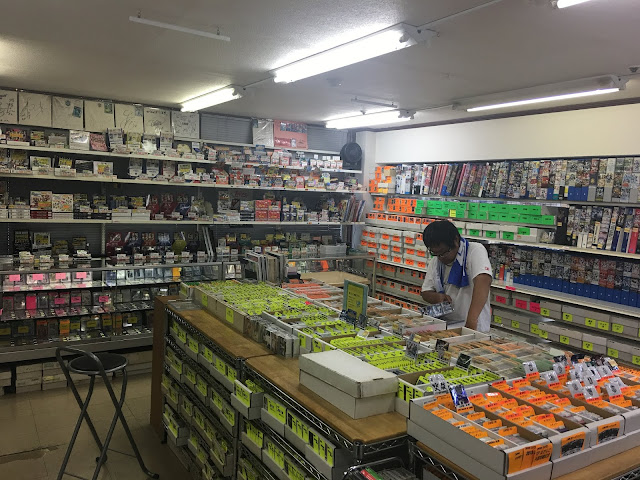 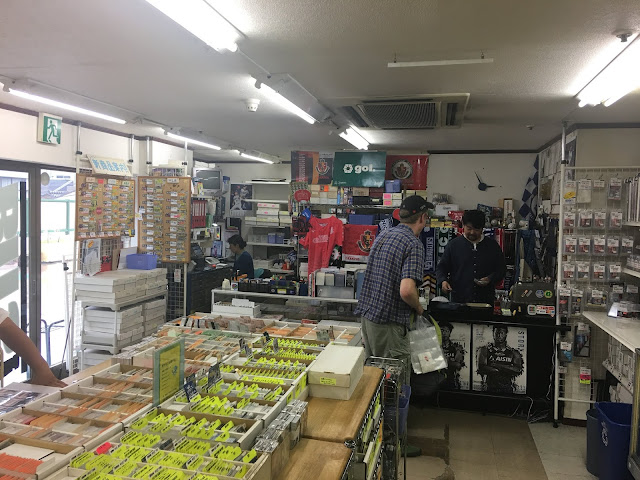 That's Sean talking to the male owner at the cash register in the second photo.  The female owner is at the computer on the left.  Sean wrote a post about our trip there as well where you can see a picture of me damp with both rain and sweat (it's not attractive).

I was trying to keep track of which stores took credit cards but I unfortunately didn't notice whether or not they did here.

I liked this store quite a bit (pun not intended).  I almost stopped by here again when I was back in Nagoya about a week later but I ran out of time after leaving Match Up and before heading to a JWBL games in Ichinomiya.

The map shows them smack in the middle of the building but as I pointed out earlier they're more on the north side of the building where the external staircase is.
Posted by NPB Card Guy at 8:23 PM

Love Bits, they've become my go-to now even though they're usually sold out with MLB products because a certain group of customers (don't get it twisted, they're nice folks and I know them) keep buying them out, one hobby box at a time lol. I just love how organized they are. Right down the singles pages on their website, letting me know ahead of time (ie when I'm waiting at the airport) which singles to grab and buy. Also one recommendation from me is to look through the little storage boxes littered throughout the store in any available space the tencho can find. Inside them you can find some neat stuff from the 80's and 90's and there's even a box devoted to Topps Kanebo stuff from 2003 (or was it 2002?). Also inside the cases (like after the rows of big ticket autographs being advertised) are some plastic bins with some autographs of lesser names that can be had for about 2,000 yen at most. Not terrible by Japanese autograph pricing standards, terrible by Topps/Panini autograph pricing standards (though then again the US stuff is overproduced while with BBM/Epoch maybe 3,000 autos got made at most). I've also started branching out into their more soccer oriented stuff (Go Grampus!) because why not? There's some interesting stuff there.

As for credit cards, I don't think they'll accept any unless they're backed by a big Japanese bank like M-UFJ. Could be wrong as I have had conversations with the owner about VISA/Mastercard credit cards in the Japanese retail industry (not just in the context of card shops) and they know what they have to do to keep that system. Not sure they actually keep it in place though since it's not like they're expect their clientele to constantly pay with those. If you're super curious I could ask my collecting buds in the area to confirm or deny it.

Also I've been rethinking my strategy of describing where this shop is located. Saying it's on top of a koko-ichiban is accurate, but what'd make it even more accurate to English speakers would be saying that it's four LONG blocks away from the U.S. Consulate in Nagoya. Since the very subway station closest to the shop is 国際センター (international center, meaning the consulate building).

Actually I went back to Bits just a few days ago. The owner asked where my friend was and I told him you had gone back to the US, so he remembers you!

Glad to see you got a picture of me in there after I got you in my post about the store :)

Like Zippy Zappy they are also my "go to" store in Nagoya now (I don't think I'll be going back to Mint Ponyland anytime soon) even though they don't stock many cards that I am interested in (I've now picked their vintage Calbee selection clean of everything I need). They are so nice and they are a great source of supplies so I'm happy to give them some of my business whenever I can. I'm in the middle of organizing my entire vintage collection into albums (they are mostly in shoeboxes and other random containers now), so all my sheets and albums are coming from them.

I appreciate the comments from you guys. I was trying to pay attention on this trip to what the stores carried besides what I was specifically looking for but I don't think I've done a very good job. Plus it's been over four months now that I'm writing about these...

Looks like someone could spend quite a bit of time in this place. It also looks like they've got a more singles for sale than some of the other shops that you've been featuring.

@Jon - that's probably more a function of my photos than of the store itself. BITS probably has the same number of singles as Mints Odawara and Ikebukuro and less than Quad Sports. They are among the best organized though.