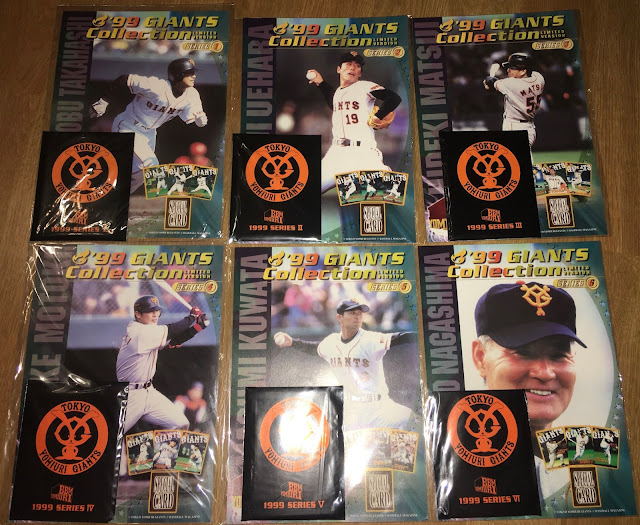 I came across an interesting item on Yahoo! Japan Auctions a few months back.  I asked Ryan to pick it up for me and he included it in the stuff he shipped me last week.  In 1999 the Yomiuri Shimbun teamed up with BBM to do a set of baseball cards that were given away to new subscribers.  There were a total of 36 cards available - 18 cards for the base set along with 18 "special" cards.  The auction I found included unopened packs of the set along with a bunch of loose cards from it (and randomly a 1999 Calbee So Taguchi card).  I thought I'd devote a post to the set and how it was distributed.
The set was split up into six Series.  Each Series consisted of three base cards and three "special" cards.  Series I was cards 1-3 of both the base and "special" cards, Series II was cards 4-6 of both, Series III was cards 7-9 of both and so on.  Each Series was distributed in a pack of four cards that was included in a plastic bag with an oversized (roughly 8 inches by 5 1/2 inches) advertising card.  Each pack was supposed to contain all three base cards for the Series and one of the three "Special" cards.  I say "supposed to" because my Series IV pack actually contained only one base card and all three "Special" cards.
Because I only got one base card in the Series IV pack (and the missing base set cards were not in the bunch of loose cards that came with the auction), I'm two cards short of a complete base set.  But I also have 11 of the "special" cards.
Here's some examples of the base cards:

The three "special" cards for Series III used a completely different design than the other 15.  I ahve two of these - the other one is Hideki Matsui.  There are apparently some sort of gold parallel available for these three cards also.

There are 12 players who have both a base card and a "special card" - Balvino Galvez, Hiroo Ishii, Kazuhiro Kiyohara, Masumi Kuwata, Domingo Martinez, Hideki Matsui, Daisuke Motoki, Tomohiro Nioka, Toshihisa Nishi, Takayuki Shimizu, Yoshinobu Takahashi and Koji Uehara.  Matsui, Takahashi and Uehara actually have two "special" cards each - Matsui and Takahashi have the different design Series III cards while Uehara has two of the gold facsimile autograph cards.  There are six players who only have base set cards - Koji Gotoh, Masahiro Kawai, Hiromi Makihara, Shinichi Murata, Hideki Okajima and Naoki Sugiyama.  There are two players who only have "special" cards - Yusaku Iriki and Masaki Saitoh - along with manager Shigeo Nagashima.
I found the oversized advertising cards that were included with the packs to be kind of interesting.  Each one features a player on the front and shows the base cards that appear in that particular pack.  The backs each have some sort of information on them although I'm not entirely sure what they are.  The Series I card has a checklist of sorts on the back of it but it only lists the cards by number.  The Series II card has some sort of promotion about the Series I "special" cards on the back of it.  I really have no idea what the Series III card has on its back but the Series IV and Series V cards have ads for the BBM Mr. Giants set that was dedicated to Nagashima.  The Series V card also has Nagashima's managerial record in the years that he led the Giants to the Central League pennant on it.  The Series VI card has Nagashima's career batting record on it.  Here's the front and back of each of these cards: 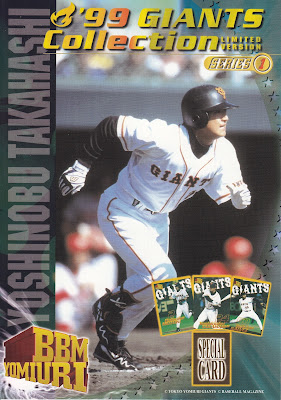 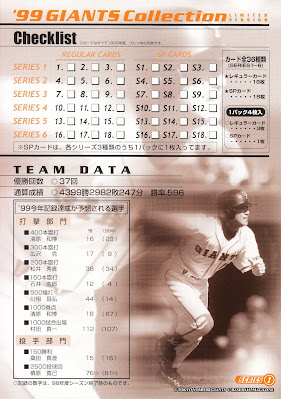 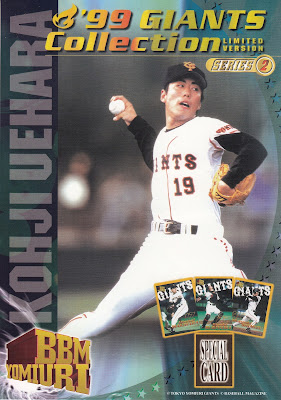 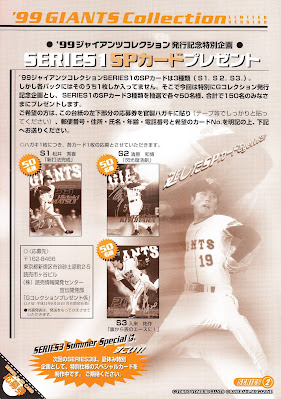 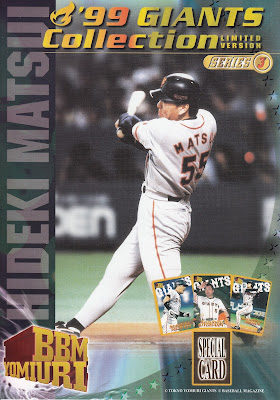 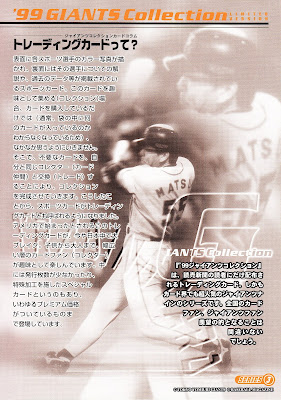 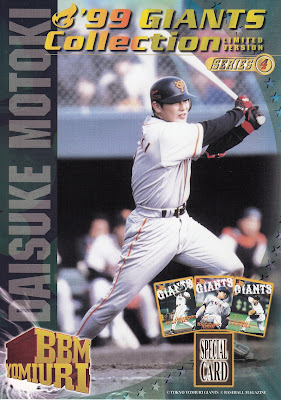 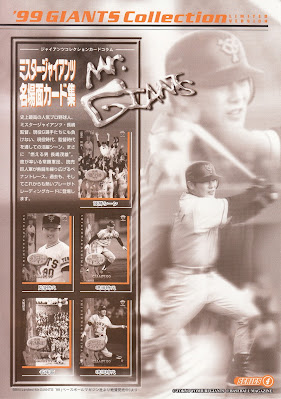 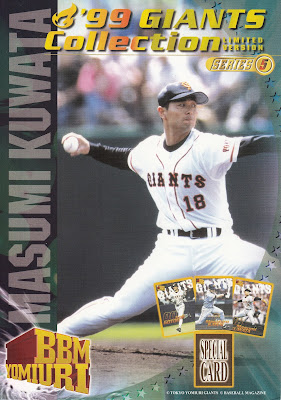 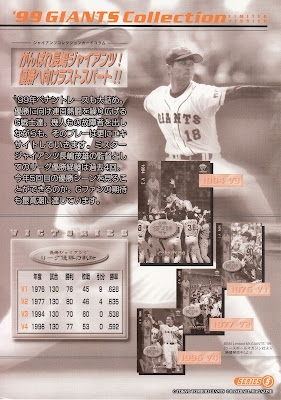 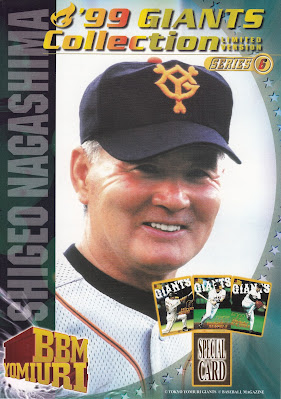 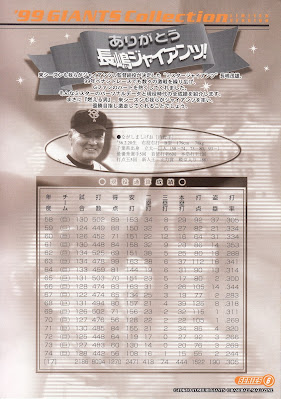