This week I got another big box from Ryan of "This Card Is Cool" containing the latest stuff he's found for me in Japan.  And when I say "big box" I mean BIG box - it weighed around 13 pounds!  It showed up at my house on Thursday afternoon but between work and the fact that my wife and I were going to a concert in Philadelphia that evening, it wasn't until about midday on Friday (which I had taken off) until I finally got a chance to open it up.
The problem I run into when I get one of Ryan's shipments is figuring out where to start - both with ingesting the cards into my collection and posting about them.  I thought I'd start with a bunch of random cards.
Ryan helped me make a lot of progress to my goal of having a full run of all of BBM's flagship sets.  I'm not going to show all of these but he got me a bunch of the 1995 BBM cards that I needed.  The 9 card Hideki Irabu puzzle is now complete along with all the Late Series Marines cards.  I'm down to only needing five cards to complete this set - two of them are from the 9 card Ichiro puzzle.  (UPDATE - Somehow I missed that I already had that Tom O'Malley "Then And Now" card.  Not only did I already have it but I featured it in the post I did on random cards Ryan had sent me in his last package!)

He sent me several of the cards I needed for the 1996 BBM set.  With the last four "95 Record Maker" cards and the last of the Akira Etoh puzzle cards I've now completed the "low numbered" set.  All I need now are some of the Late Series Dragons cards and Ryan sent me a couple of those as well.  Here's some of them:

He also got me one of the two Late Series Swallows cards I need to complete the 1999 BBM set:
Speaking of the 1999 BBM set, that set had a 10 card insert set called "Dream Team" which was essentially a Best 9 team for all of NPB - I think the photos were taken during the MLB tour in the fall of 1998 although no MLB players appear on the cards.  The cards are die-cut.  Ryan got me one of the two cards I needed:
The last card I need from the insert set is Shigeo Nagashima.  The reason there's 10 cards in a Best 9 set is because BBM included him as manager.
BBM issued a very limited version of these cards that were not die-cut.  They were only available through some sort of mail in lottery.  Ryan picked one of these up for me as well.  Here's both the die-cut and lottery versions of the card side by side:
One of my other collecting goals is to have at least a handful of cards from all of BBM's team sets.  I'm almost done with this thanks to Ryan's help.  Here's some (but not all) of the team set cards he picked up for me:

Ryan also helped alleviate my OCD problem with my Franken-set version of the 2017 Epoch Lions set.  He picked me up the last 13 base set cards that I needed to replace all the short print variant cards I had.  I won't show all of these but I'll show the base set and 1 star variant versions of Sosuke Genda's card:
He picked up a number of other cards from my want list as well.  When I was researching a post on the Kanebo sets from 1993 and 1994 I discovered that Hiromitsu Ochiai's card from the 1994 set showed him with Shigeo Nagashima at the press conference announcing him signing as a free agent with the Giants that winter.  Despite not being happy that that event ever happened I thought it would be an interesting card to pick up and Ryan tracked it down for me:
He found two more of the "All Tournament Team" insert cards from the 2009 Konami Baseball Heroes WBC set.  I was especially happy to get the Cespedes card as I had only seen it for a fairly high price on Ebay:

I've got the "printed autograph card" inserts from the 2017 BBM Icons - Japan Pride set on my want list although Ryan and I haven't really discussed how much I really want him to look for these cards.  He did pick up the Seiichi Uchikawa card for me though and it reminded me of how nice these cards look:
He also tracked down the missing card from my 2000 BBM O-N Franken-set.  Now if I could just pick up the Sadaharu Oh memorabilia cards without losing my house...
Speaking of "ON" cards from 2000, Calbee had included a set of reprinted cards of both Oh and Nagashima as a subset in their 2000 set.  There was a card showing Nagashima homering in the "Emperor's Game" in 1959 that I'd wanted for a while and Ryan was able to find one for me:
So just to be clear on the Nagashima card - it's a card from 2000 that's a reprint of a card from 1974 showing an event from 1959.  That's Emperor Hirohito and his wife Empress Nagako in the center of the top of the card (the Empress is in white and the Emperor is to the left of her).
Ryan found so many of the cards from my want list that my want list went from seven pages to four.  But he also picked me up some odds and ends that I wasn't expecting.  He sent me two cards that were given away with bento boxes at Seibu Lions games last year: 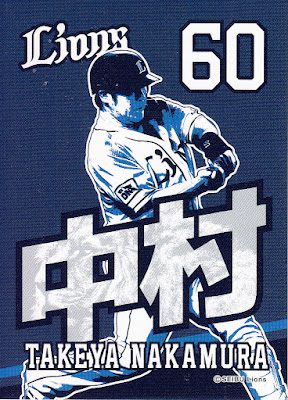 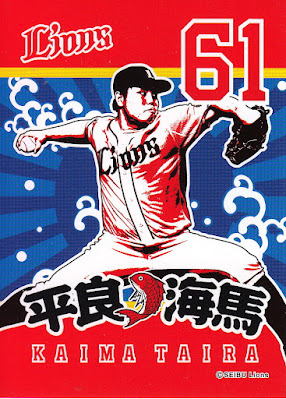 The Eagles were selling "Eagles Masahiro Tanaka Chips" this year at the ballpark - these were bags of potato chips that included one of 18 Masahiro Tanaka cards.  Ryan sent me one of the cards:
Finally Ryan and I have had a kind of ongoing joke the last couple years about whether or not it would be possible to put together a parallel version of the Epoch's NPB set using the promo cards Epoch issues in one card packs and distributes to card shops to be given away.  I think so far the most I have from any one set is 13 from the 2019 edition.  Ryan sent me six for this year's set including an unopened pack: 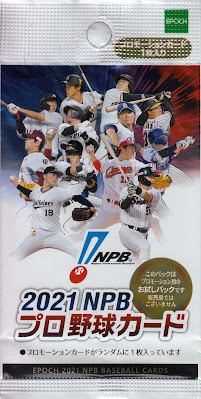 Here's one of the six cards (although not the one from the pack):
I'll be showing off plenty more cards in the next few weeks but let me take a moment here to again thank Ryan for finding all of these cards and shipping them off to me.
Posted by NPB Card Guy at 10:21 PM