This is going to be kind of an odd story so bear with me for a minute.  I've been trying to make sense of something for a couple weeks and I think I finally figured it all out.

According to both Engel and Sports Card Magazine, BBM issued a high end box set in 2000 called "O-N" that was dedicated to Shigeo Nagashima and Sadaharu Oh.  There were 2000 numbered sets issued that contained 54 cards each.  The 54 cards included a film card, a windbreaker card and a jersey card for each player - so each box had four memorabilia cards and two film cards in it.  I don't mean one of four possible memorabilia cards - each box had all four memorabilia cards in it.  As you might expect, the original price of the box was pretty high - 30,000 yen (which in 2000 would have been roughly $280).

There were two of these sets available on Ebay a few weeks back.  Both were being sold by the same seller.  One had a starting price of around $20 and the other had a starting price of around $50.  I didn't really notice any differences at the time in the two sets - they were both listed as complete sets - but I did think it was odd they were being listed at two different prices.  This wouldn't normally be something I'd be all that interested in but the idea of picking up some memorabilia cards of Oh and Nagashima fairly cheaply was quite appealing so I bid on the cheaper set and won it for $28 (plus $10 shipping).  The set showed up a few days later (actually the same day I got Ryan's last package so I was wading in cards that day) and I got very disappointed and confused.

The disappointment came first.  As I said, the set was supposed to have 54 cards in it.  The set I got had 55 cards in it, but only 51 unique ones.  I was missing cards 15, 52 and 54.  The last two were exceptionally disappointing as they were the jersey and windbreaker cards for Sadaharu Oh.  I contacted the seller and told them that the set was not complete and I wanted them to either supply the missing cards or give me a partial refund.  The seller's first reply was "This is a $300 set that sold for $28" and that I could return it for a full refund.  I then pointed out to them that first of all it wasn't a $300 set without the two Oh memorabilia cards and second of all that the "book value" of the set really didn't enter in to it - they were supposed to sell me a complete set and they didn't.  They backed down pretty quick and agreed to refund me the $5 I asked for.  I felt that even without the Oh cards I was getting a pretty good deal on two Nagashima memorabilia cards but I also felt there should be some consequence for them having an incorrect listing.  I gathered from the messages I had with them that they are basically a consignment outfit and don't really know much about what they're selling.

On to the confusion.  I mentioned that I got 55 cards.  Four of the cards were duplicates.  Or were they?  On closer examination, I realized there were some differences.  I had one version that had a red letter on the front and a card number of "ON XX" and another version that had a blue letter on the front and a card number of "ON-BXX".  Was there some sort of parallel version of the set as well?  There was no indication in either Engel or SCM of there being any sort of parallels.  As I looked through the rest of the set, I realized that I had a mix of versions.  Of the 55 total cards I had, 31 had card numbers in the form "ON XX" and 24 had card numbers in the form "ON-BXX".  Here's the front and back of one of the cards I had duplicates of (card #7): 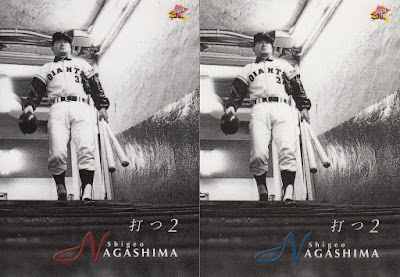 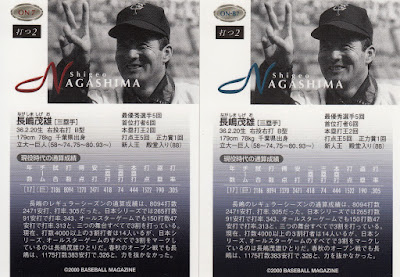 Another source of confusion involved the 10 card subset that featured both players.  Engel lists all these cards are being gold bordered.  Only five of the ones I have have a gold border (and they all have card numbers like "ON XX" - the other five have silver borders on the top and bottom (which all have the "ON-BXX" card numbers.

I had mentioned before that there had been two of these sets on Ebay, the one I won and the one that had a starting price of $50-ish.  The other set did not sell so the seller relisted it starting at $10.  I took a look at the pictures of the auction and realized that there were multiple Oh jersey and windbreaker cards in the auction.  So maybe that's what happened to the Oh cards that were supposed to be in my set.  I sent a message to the seller asking about it and basically got blown off - they felt they had already spent enough time talking to me about it.  I bid on the second auction but ultimately lost out - the set sold for $42.  So I still don't have the Oh cards.

In looking at the photos for the other auction and actually paying attention to the description, I think I finally have figured out what's going on.  The box my set came in is black and says "ON 2000 BBM Limited Box".  The box for the set in the other auction was red and said "BBM 2000 BBM Basic Set".  There were two versions of the set! 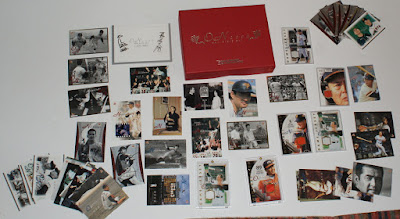 So what I think happened is pretty obvious - someone had one of each of these sets and the cards got mixed together at some point.  When the cards were put up for sale, someone did a fairly sloppy job of separating them into the two sets - in fairness the differences aren't entirely obvious, especially if you aren't familiar with card sets.  So I've ended up with a franken-set - an unholy hybrid of the two sets.  Which I wouldn't mind so much if I had the Oh cards - I'm pretty sure the two in the lower center of the above picture are the ones that should have been with my set.  I'm also pretty confident that whoever won the second auction is going to be confused by this as well - maybe they'll read this post and contact me!  Not that I expect to be able to get the Oh cards but maybe we can resolve some of the issues with the rest of the set - they won't have a complete set either.

OK, with all of that out of the way, let's talk about the set itself.  As I've said a couple times now, it's a 54 card set.  There's 20 cards for Nagashima, 20 cards for Oh and 10 cards featuring both of them with the remaining four cards being the windbreaker and jersey cards for them.

The 20 cards for each player pretty much parallel each other - the first five cards of each group feature the player's photo superimposed on a silver baseball. The next five cards feature the player batting - the first of these five cards are the film cards - a card with an actual piece of film embedded in it.  The next two cards are dedicated to fielding and the one after that is dedicated to base running.  The fourteenth card is for the player's retirement and the fifteenth is for the first Nippon Series the player won as manager (1994 for Nagashima and 1999 for Oh).  The sixteenth card is for their respective league championships in 2000 (Nagashima's Giants won the Central League that year while Oh's Hawks won the Pacific League) and is thicker stock than the rest of the cards.  Card 17 breaks the pattern - Nagashima's card is for "leisure time" while Oh's features his "batting style" - although both cards show the player with a samurai sword.  Card 18 shows the player with his wife while card 19 celebrates the player's playing career (17 years for Nagashima and 22 years for Oh).  Card 20 shows each of them during the 2000 Nippon Series - on his card Nagashima is getting tossed in the air while the Giants celebrated beating the Hawks.  Here's several of the cards from this part of the set:


The back of ON-B18 shows Nagashima playing Shogi with his son Kazushige who would grow up to play in NPB also: 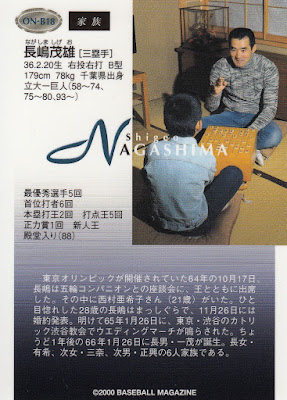 Finally, here's the front and back of the two Nagashima memorabilia cards.  The cards came in screwdown cases that don't allow a decent scan so I took pictures instead: 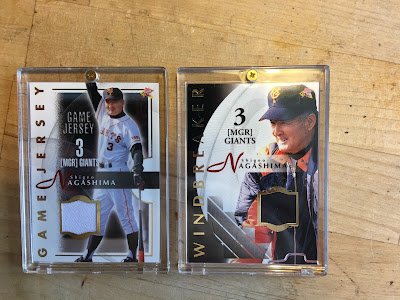 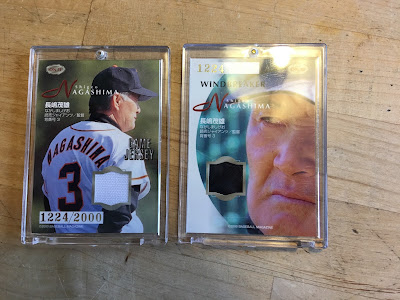 All in all this was a pretty attractive set.  BBM did a really good job picking out pictures for the set and I was pleased that there wasn't a lot of duplication between the photos of Oh in this set and the ones BBM used in their Oh tribute set eight years later.  I certainly wouldn't have paid $300 for the set but I don't regret spending the $33 I did ($28 winning bid plus $10 shipping minus the $5 I got the seller to refund me) on it.

One last note - I reassembled how I think the box was originally packaged and took a couple photos.  The packaging was pretty attractive as well - there was a cardboard sleeve over a felt covered box with a gold satin interior.  Engel says that it's like a jewelry box. 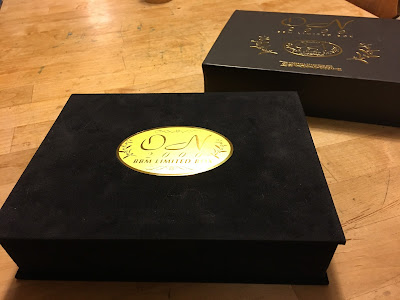 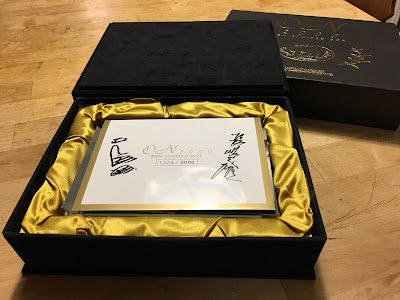 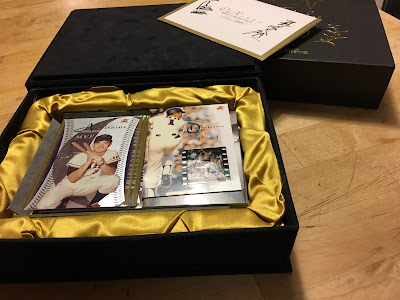 Great story! Too bad you lost out on the 2nd set, would've been awesome.

It's a great set...and a real interesting story, too...