Ten years ago BBM issued a box set called "HR Chronicle" which celebrated the top home run hitters in NPB history.  I've been wavering on picking one up for a while (I almost bought one at Wrappers in Tokyo four years ago) but it wasn't until I found one on Yahoo! Japan Auctions a few months back for 400 yen that I finally decided to get one.  Ryan once again was nice enough to pick it up for me, saving me a bunch of proxy service fees.  I'm glad I finally got it because it's a nice little set.

The original set had 47 cards in it - a 45 card base set and 2 "premium" cards (which could be photo cards, film cards, bat cards and autographed cards).  I only got the box set (which you could have probably figured out by the 400 yen price).  The cards are a nice thick stock and feature a photo of the player on the front (well, duh) with the player's total number of NPB home runs in the lower left corner and the player's career home run totals broken into a bar graph by season.  Here's the front and back of Sadaharu Oh's card (#01) as an example: 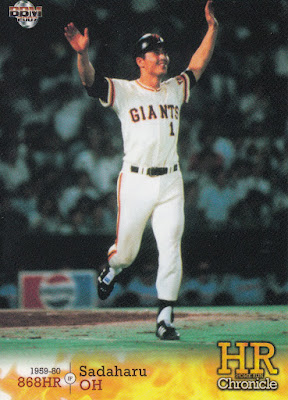 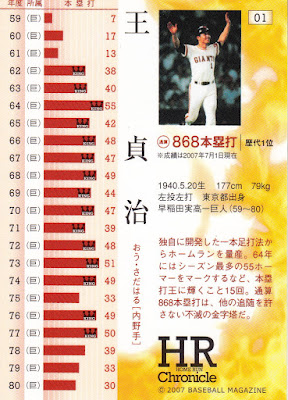 There's a little crown on each year the player led the league in home runs.  Players who played in MLB or the KBO have their home runs shown on the back of their card as well (with purple bars) but those home run obviously aren't included in the total on the front.  The home run totals are through July 1, 2007 which of course only affects the 11 active at the time players in the set.

The player selection is a bit interesting.  My first thought was that the set featured the top 45 career home run hitters in NPB history.  But then I noticed that the last card was of Seung-Yuop Lee who only had 100 NPB home runs at the time.  Surely there had been more than 45 guys with over 100 home runs in NPB.  The answer is yes, there have been.

I don't have a list of home run totals as of July 1, 2007 but I do know where to find a list as of the 2011 season - the Japanese Baseball Database.  Eyeballing that list and accounting for differences in totals for players still active in 2007 and later, it looks like the set includes everyone who had more than 300 home runs at press time - that accounts for the first 31 cards in the set.  The top player on the list not included is Akinobu Mayumi with 292 home runs.  The set includes 35 of the top 37 guys on the 2011 list - the only ones missing are Alex Ramirex and Michihiro Ogasawara who had a much lower home run total in mid 2007 than after 2011.  The remaining cards include a bunch of the big home run hitters from the early days of professional baseball in Japan - Noboru Aota, Yasumitsu Toyoda, Futoshi Nakanishi, Fumio Fujimura, Hiroshi Ohshita and Kaoru Bettoh as well as Randy Bass and the aforementioned Seung-Yuop Lee.

One thing I like about the set is that most of the photos are not ones that BBM has used in other sets - the Oh one is a notable exception but since it shows him hitting home run #756 I think it's undertandable.  Here's some more sample cards:

Ryan included the box the set was came in so I took a couple pictures of it to show off how the set was packaged: 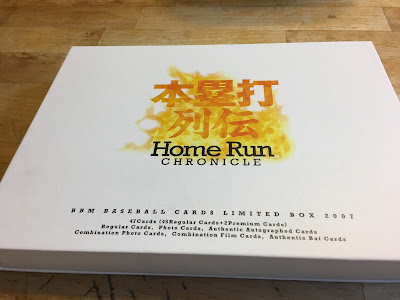 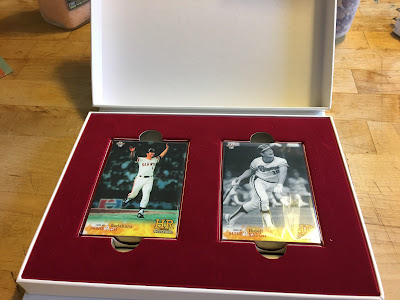 I had passed this set up a few times before myself, but eventually looked at it and decided I needed it too - it's a great looking set, with great images, and a nice box to boot! I figured you'd like the box too.

It's crazy to think that Oh hit 30+ home runs all of those years in a row... even in the 22nd season of his career. Truly amazing.