Now that the World Baseball Classic is completed Topps has finished issuing their Topps Now cards for it.  The total number of cards in the set is 64 although there are three cards with Spanish language versions so I've seen the total listed as 67 as well.  The complete checklist is up on TradingCardDB.

There ended up being seven cards featuring members of Samurai Japan.  The first six highlight each of Japan's six wins in the tournament.  The first card is for Japan's victory over Cuba on March 7th and shows Nobuhiro Matsuda (#W-6).  The next card shows Sho Nakata hitting a solo home run to beat Australia on March 8th (#W-9).  Samurai Japan's victory over China on the 9th is the subject of the third card which features both Nakata and Seiji Kobayashi (#W-14).  Nakata is again the featured player on the fourth card which is for Japan's nail biter of a win against the Netherlands on March 12th (#W-25).  The fifth card highlights Tetsuto Yamada's two home run performance against Cuba on March 14th (#W-35).  The sixth card shows Nobuhiro Matsuda again (although he's not identified on the card) and covers the victory over Israel on March 15th (#W-39).  The final card (#W-62) is for Kodai Senga being named to the All-World Baseball Classic Team.

So seven cards but only five different players.  Kind of disappointing that they chose to have Sho Nakata on three cards and Yoshitomo Tsutsugoh on none.  At least the cards look nice.  I ordered the first Matsuda card from someone on Ebay a few weeks back and received it on Friday: 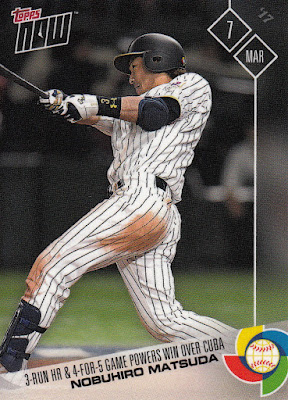 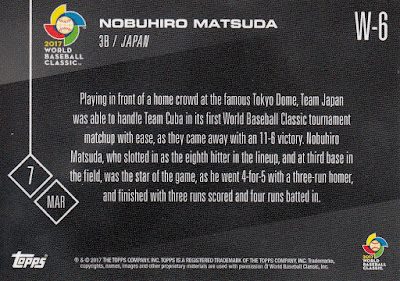 I ordered three of the others from the same seller on Ebay yesterday so I still need to track down the other three at a price I'm willing to pay.

Several other NPB players (both past and present) are also featured on cards in the set.  Wladimir Balentien of the Swallows has two cards - #W-38 showcasing his 2 home run game against Cuba on March 14th (helping the Netherlands knock Cuba out of the tournament for the second straight WBC) and #W-61 commemorating his being named to the All-WBC Team.  Brandon Laird of the Fighters shares card #W-31 with Esteban Quiroz - the card commemorates the two of them hitting three run home runs to help Mexico beat Venezuela on March 12th.  New Fukuoka Softbank Hawk Alfredo Despaigne is on #W-17 for his grand slam that beat Australia on March 10th - this card also has a Spanish language version.  Former Chiba Lotte Marine Tae Kyun Kim is the sole Korean player in the set - #W-12 covers his pinch hit two run home run to beat Taiwan on March 9th.

Someone from an unspecified card company contacted me before the WBC (and whom stayed in Seoul) for some games asking me about local Korean collectors but the conversation ended after a series of email exchanges. I wouldn't be surprised if a set was released.

I agree with you: "My hope is that with Team USA winning the WBC that Topps will do some WBC card sets that are reasonably priced."
I'd love to complete that set! Hopefully it's at a price point that is agreeable to my budget!

I agree... I hope Topps makes a set and it is reasonably priced. There were a bunch of fun moments in the tournament which would make for great cards!