Card Of The Week March 19

Wladimir Balentien was named the MVP of Pool E of the World Baseball Classic this past week.  He went 8-13 in the three games in Tokyo with 3 home runs and 10 RBIs.  Overall for the tournament he's hitting .591, which leads all batters with more than 10 at bats.  He's leading in almost every other major offensive category - hits (13), runs (8), home runs (3 tied with five other players), RBIs (10), OBP (.654) and Slugging (1.000).  He'll get his next chance to shine tomorrow night against Puerto Rico in Los Angeles.

Here's a card of him from last year's BBM Swallows set (#S71) with Tetsuto Yamada, who also had a pretty good Pool E including two home runs against Cuba on Tuesday: 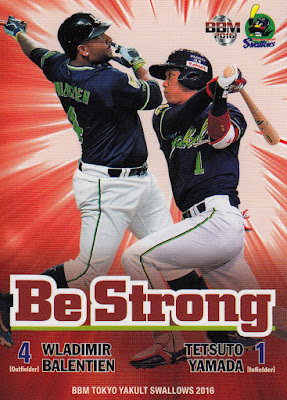 Yamada of course will next see action on this coming Tuesday against Team USA.  I will be at the games in Los Angeles - I'm flying out of Maryland early tomorrow so I'll be a zombie at the Netherlands-Puerto Rico game but I should be well rested for Tueday night's game.  If you're at the games, give me a holler on email or twitter (@npbcardguy) and say hello!