I've frequently mentioned (well, complained really) that there hasn't been an OB team set for the Fighters that covers their history before they moved to Hokkaido after 2003.  Recently I discovered that that's not completely true - their 2003 BBM team set had an OB section to it.

I'd bought a pack from the set back when it came out but I wanted to track down one particular card from it that shows the colorful uniforms of the 1973 Nittaku Home Flyers.  When researching the set in Engel, I realized that there were a bunch of OB cards in it.  So I tracked a complete set down on YJA and asked Ryan to pick it up for me.

This was the first time that BBM did a team set of any kind for the Fighters.  2003 was the last year that the Fighters played in Tokyo and was also the 30th Anniversary of Nippon-Ham buying the team.  I don't know if either of those played a factor in BBM deciding to do a team set for the Fighters that year - it wasn't until 2004 that they started doing pack based team sets for all 12 teams.

The base set contained 126 cards.  The first 78 cards are a traditional (or what has become a traditional) team set.  There's 66 "regular" cards for the players (and manager Trey Hillman and coach Kazuyuki Shirai) of the 2003 team and two six card subsets - "Top Prospects" and "Top Of Fighters" (team leaders from 2002).  Here's some example cards from this part of the set:


The remaining 48 cards in the set were split into seven different subsets.  One of these was a two card checklist subset but the remaining ones all dealt with the history of the Fighters.  I'll hit each one of these in order.

The two checklist cards actually do contain a little history themselves as the former mascot Gyorotan and the then-current mascot Fighty are shown in the background.  The front of each checklist uses a tinted picture while the back shows the untinted version.  Here's the back of checklist #1 (#085) and the front of checklist #2 (#086): 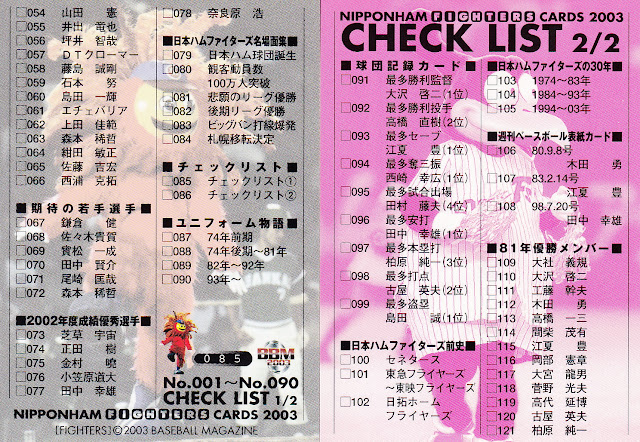 Next is a four card subset labelled "Uniform Story" that shows the different uniforms worn by the Fighters from 1974 to 2003.  The back of each card shows a drawing of the home and away versions of the uniform a la "The History Of Uniform".  Here's manager Futoshi Nakanishi modeling the uniform worn during the first half of 1974:


The next group of cards is a nine card "Team Records" subset.  As you'd expect from that name, this subset includes the career leaders in a number of categories for the Fighters - saves (88 by Yutaka Enatsu), RBI (683 by Hideo Furuya), home runs (167 by Junichi Kashiwabara), strikeouts (1454 by Yukihiro Nishizaki), managerial wins (631 by Keiji Ohsawa), stolen bases (351 by Makoto Shimada), pitching wins (95 by Naoki Takahashi), hits (1835 byYukio Tanaka) and games played (1435 by Fumio Tamura).  Tanaka was the only one of these players still active at the time.

That the Fighters existed before Nippon-Ham bought them is acknowledged in the next subset.  This is a three card subset that I do not know the title of.  The first card shows Hiroshi Ohshita in a Tokyo Senators uniform in 1946 (the franchise's first season).  The second card shows a group of Toei Flyers (including Isao Harimoto) from around 1959-60 and the final card shows the infamous Nittaku Home Flyers alternate uniforms from 1973.


The next three cards feature Fighters players on Shukan Baseball covers over the years.  One shows Isamu Kida from 1980, one shows Yutaka Enatsu from 1983 and this one shows Yukio Tanaka from 1998:
The final subset is 18 cards devoted to the 1981 Pacific League Champion Fighters called "Legend Of Champions".  With the success that the Fighters have had since moving to Sapporo in 2004 it is easy to forget that at this point in their history the Fighters' franchise had only won a single Nippon Series and that was in 1962 when they were owned by Toei.  Their 1981 pennant was the only one that the team won between 1962 and 2006.  So it shouldn't be a major surprise that there's such a large subset devoted to that team.  What is kind of a surprise is that the subset includes Yoshinori Ohkoso, who was the team owner at the time (and I assume the head of the Nippon-Ham corporation).  The subset also includes manager Keiji Ohsawa, Yutaka Enatsu, foreign players Tommy Cruz and Tony Solaita, Hideo Furuya, Junichi Kashiwabara, Isamu Kida, Makoto Shimada and Kazumi Takahashi.

I mentioned earlier that I'd bought a pack for this set back when it originally came out.  Here's the wrapper: 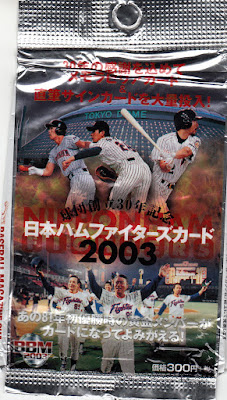 The set also included two insert sets - "Fighting Spirit" (18 cards) and "Fighters Best 9" (12 cards - includes manager, relief pitcher and DH if you're wondering how they got to 12).  The "Fighting Spirit" cards only have active (at the time obviously) players while the "Best 9" cards include both active and OB.  I pulled a "Fighting Spirit" insert in the pack I opened:

On the whole I really liked this set.  It does a pretty good job covering the Fighters' post-1974 history.  Since the bulk of the OB players are from the 1981 team I think there's some significant players in the team's history that could have been included (Isao Harimoto in a Fighters uniform, Toshizo Sakamoto who was the first ever DH in NPB, Masanori Murakami who was on the 1981 team) but some OB Fighters are better than no OB Fighters.  I'd still like an OB team set that covered the pre-Nippon-Ham days.  I know that the 2004 BBM Fighters set also contains an OB player subset but I suspect that they are all Nippon-Ham players as well (Harimoto is in that subset though).

Oh, and I'm sure you'd all be disappointed if I didn't show off the card that made me look for this set in the first placed so here it is: