Alan Walden, the ancient newscaster on WBAL radio out of Baltimore back 15-20 years ago, used to open his morning news casts with the phrase "Good morning!  We have a lot to talk about".  I was never a particular fan of either him or the radio station (I pretty much only ever listened to them for traffic information when I was commuting through Baltimore and when they were the Orioles radio affiliate) but I felt the phrase was appropriate today as I received another box of goodies from Ryan in Japan.  I'm going to be doing a lot of posts on the contents over the next few days - the box had five complete card sets in it along with a bunch of singles.  I'll start with most of the singles - there's a LOT to talk about...

First up, Ryan found over half the Sports Card Magazine inserts that I was looking for.  Issue #64 (published in July of 2007) had three bonus cards from the 2007 BBM 1st Version set - Kuniyuki Kimoto (who had been traded from Nippon-Ham to Orix at the end of June) and two Americans who were returning to NPB after briefly going back to the US - Brian Sikorski and Alex Ochoa.  Kimoto had had a card with the Fighters in the actual 1st Version set.  This is the only BBM card of Sikorski with the Swallows.

SCM Issue #67 the following January had three original cards for guys who had switched teams that winter.  Ryan found me the Osamu Hamanaka card who had traded from Hanshin to Orix in November of 2007.  The photo is probably from his introductory press conference with the Buffaloes (as he's wearing a jersey over a dress shirt and tie) and it looks like it was taken outside the Osaka Dome.  You can see that someone's wearing a Buffaloes jersey on Hamanaka's right - I'd be willing to bet that that's Makoto Yoshino who was included in the trade (and is not one of the other two cards in the issue).

One of the hot rookies of 2008 was Sho Nakata of the Fighters.  Nakata apparently homered in his first at bat in a spring training game that year (technically his first at bat as a professional although his first official at bat in NPB wouldn't come until May of 2009) and BBM used it as an excuse to put a card of him in SCM Issue #68 in March of 2008 (they must have turned this around very fast as he hit the home run on March 1st and the issue would have been out by the end of the month):

Speaking of hot rookies for the Fighters, Yuki Saitoh was the one everyone was talking about in 2011.  BBM decided to highlight the first wins and hits by five rookies (including Saitoh) in SCM Issue #87 which came out in May of 2011.  The Akiyama card is a kira parallel.


BBM did something similar the following year (issue #93 in May of 2012) although it was more of a highlights subset as it included a couple veterans as well:

In addition to the SCM cards, Ryan also found some BBM singles that I had been looking for.  Here's a card from the 2000 BBM Giants set showing the team's top draft picks from the previous three years:

How about a couple cards to fill in gaps in my uniform posts?

And not everything was from BBM.  I asked Ryan to look for a 2016 Epoch Dragons Record Breakers set (which is really an 80th Anniversary set for Chunichi) at a "reasonable" price and he sent me a card of Dayan Viciedo from the set to tide me over until he finds one:

He also picked up this really cool 1976 Yamakatsu JY1a card for me off Yahoo! Japan Auctions: 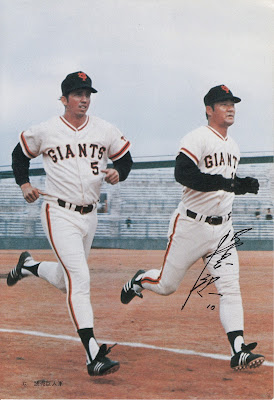 It's hard to tell from the scan but the card is pretty big - about 7 inches by almost 10 inches.  It came with the original 40 year old card wrapper: 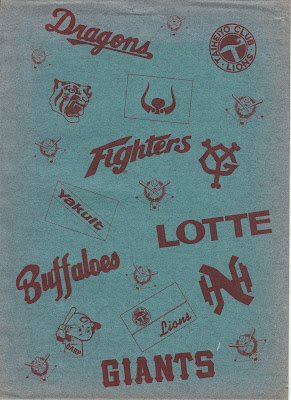 So sorry for the long post but I was pretty excited about all my new cards.  Thanks so much to Ryan for tracking this stuff down for me!

As always, I'm happy to hunt for you! And your package is here now too.

I have a bunch of larger Yamakatsu now, but I haven't really gone through them. Eventually, I will. I'm sure a few will find themselves in your hands by the end of the year!