I was looking through the cards of the latest BBM Retirement set (on-line at Jambalaya but I expect my set to show up in the new few days) and I realized that I had missed the fact that Hitoshi Tamura had retired at the end of last season.

Tamura was born in Kanagawa prefecture and went to high school at Yokohama High School.  He was taken in the fourth round of the fall 1994 draft by his hometown team the Baystars (his high school teammate Shoichi Kida was taken by them in the first round).  He made his debut with the ichi-gun Baystars in 1997 but he spent much of his time on the farm team until the 2000 season.  He didn't really come up to the top team for good until 2003.  He had a breakout season in 2004, hitting .305 with 40 home runs and 100 RBIs and followed it up in 2005 with a .304 average and 31 home runs.  He lost a month of the 2005 season after he was injured in a car accident however.  He played in the 2006 World Baseball Classic but a rib injury limited him to only 39 games in NPB.  Following the 2006 season he was traded to the Fukuoka Softbank Hawks for Hayato Terahara.

He broke his leg in 2008 and missed much of that season and part of the following one.  He returned with a vengeance in 2010 however, hitting .324 with 27 home runs and made both the All Star team and the Best 9 team for the first time in his career.  He played in his only Nippon Series in 2011, hitting .370 with a home run helping the Hawks beat the Dragons in 7 games.  After the 2012 season he was traded back to the Baystars along with Yasushi Kamiuchi and Teruaki Yoshikawa for Yuki Yoshimura, Shintaro Ejiri and Shogo Yamamoto.  His playing time tapered off over the next three seasons and he was released by the Baystars at the end of the 2015 season.  He was picked up as an ikusei player by the Dragons and while they considered registering him and promoting him to the ichi-gun team in the middle of last season, ultimately they never did.  He retired at the end of the season and will spend 2017 as a commentator for J-Sports.

His rookie card was #577 in the 1995 BBM set.  It looks like his first Calbee card wasn't for another 10 years - #069 in the 2005 set.  He also had cards in various Konami, Bandai, Future Bee and Front Runner sets over the years.  As far as I know there are no cards of him as a Dragon unless there is a team issue from last year that includes the ikusei players.


I don't have his rookie card but it can be seen on the back of the 2015 25th Anniversary card: 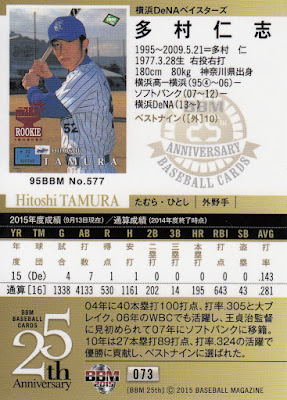 I am kind of sad that he retired, my wife and I were both huge fans of his when he played for the Hawks (and we lived in Fukuoka). We felt closest to him simply because we literally were - we sat in the right field seats and he played right field.