It was draft day today in NPB and as usual I want to do a quick post about the handful of players drafted who already have baseball cards.  There haven't been any collegiate cards published in Japan since 2013 (at least that I know about) but Panini included autographed memorabilia cards for the 2018 and 2019 collegiate Samurai Japan teams in the 2019 and 2020 USA Baseball Stars & Stripes sets respectively.  I used the list translated by Deanna Rubin as well as in this thread on NPB Reddit to figure out that there were three players in those sets who were drafted today. 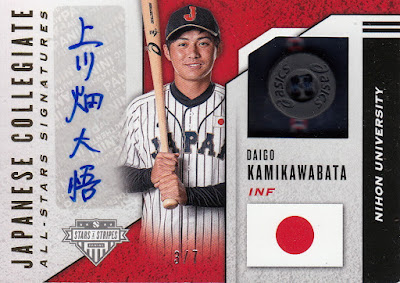 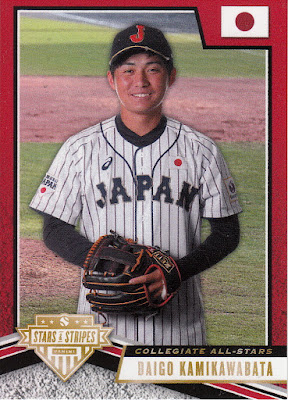 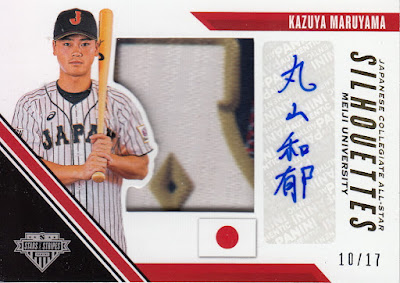 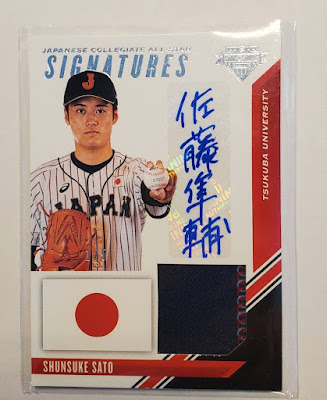 If it's not clear, Kamikawabata attended Nihon University but spent a couple seasons playing for NTT East in the corporate leagues before entering the draft.  He's the first player from these Panini sets to go professional after playing in the corporate leagues - all the other players from the sets went professional directly after leaving college.
Kamikawabata is from the 2019 set (which means he also has a non-autograph/memorabilia card in the "rack set" version of the team set).  The other two cards are from the 2020 set.  I don't actually own the Sato card - I found the image off a completed Yahoo! Japan Auction.
I was a little disappointed that Seiya Tanaka, who is in the 2019 set, was not drafted today.  I saw him pitch for Rikkio University in 2019 and he's been playing for Osaka Gas since graduating.   I don't think he had submitted his name for the draft so it's not like he was rejected by all 12 teams.  Hopefully he'll try next year.  There were a couple Shikoku Island League players drafted but it didn't look like any of them had played for the 2019 All Star team that played in the Can-Am League.
16 of the 24 players from the 2019 Panini set and 18 of the 24 players from the 2020 set have now been drafted.  Two of the six undrafted players from the 2020 set have one more year of college - Shota Morishita of Chuo University and Mikiya Tanaka of Asia University.  I believe that the remaining eleven players (Ryosuke Kodama is in both sets) are all playing for various corporate league teams.
Posted by NPB Card Guy at 6:02 PM