Card Of The Week October 3

The then-first place Marines and then-second place Buffaloes played a three game series last week in Chiba and it did not got well for Lotte.  Orix beat them 5-2 on Tuesday and then pummeled them 15-2 on Wednesday.  Things were looking better for the Marines on Thursday as they took a 3-1 lead into the top of the ninth.  With two outs and two on, T-Okada stepped to the plate and this happened:

Yoshihisa Hirano came in in the bottom of the ninth and sealed the 4-3 Buffaloes victory with his 23rd save of the year.  The sweep put Orix back into a virtual tie with the Marines for first place.  The Buffaloes went on to sweep their weekend series against the Hawks while the Marines split two games with the Eagles (with a third game getting rained out) so Orix is now in first place with a game and a half lead.
T-Okada's real name is Takahiro Okada.  He was drafted by Orix back in 2005 and he changed his registered name to T-Okada in 2010 to avoid confusion with the team's new manager Akinobu Okada.  He's kept the name even though A-Okada has not been the Buffaloes' manager since 2012.  Here's his rookie card from the 2006 BBM 1st Version set (#144): 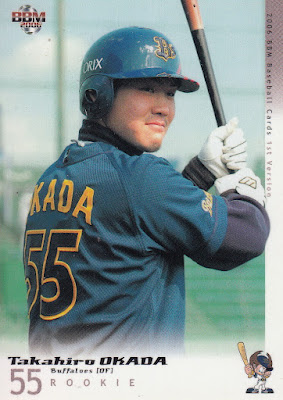