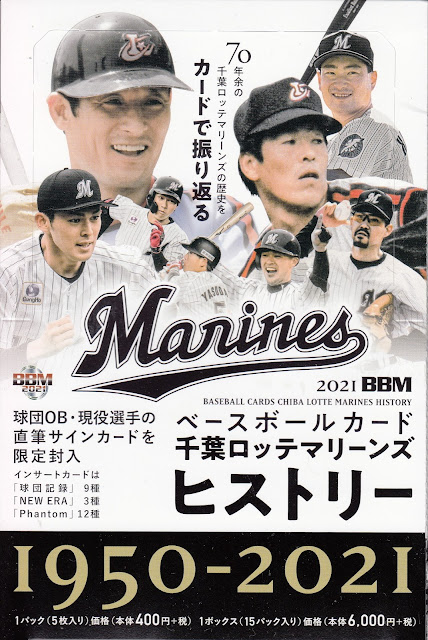 BBM published a set called "Marines History 1950-2021" a few weeks ago.  This is the fourth entry in their series of OB team sets using the "History" label, following last year's Carp and Giants sets and this year's Dragons set.  Like the earlier sets, this is a 90 card set split into three sections - "Team History", OB players and active players.

I'm going to start out this post by saying that I'm kind of disappointed with this set.  When it was announced I was intrigued that it looked like it was going to be covering the entire history of the Marines franchise.  BBM's only previous sets for the team celebrated the 40th Anniversary of Lotte buying the team in 1969 and the 20th Anniversary of the team's move to Chiba in 1992 so I thought it would be good that this set would cover the 19 years of the Mainichi/Daimai/Tokyo Orions from 1950 to 1968 - the years before Lotte bought the team.  However the name of the set is misleading - there are no player cards featuring anyone in any uniform other than either the Lotte Orions or Chiba Lotte Marines.  In fact there's only one card in the entire set showing players in Mainichi Orions uniforms and none for either the Daimai or Tokyo Orions.  So it really should be called "Lotte History 1969-2021".

It's still a pretty nice set though.  The previous "History" sets have been very attractive and this one continues that trend.

This may be the first color photo I've ever seen of Tokyo Stadium.  The stadium went bankrupt after the 1971 season, causing the Orions to be kind of a wandering team for the next six seasons although they were primarily in Sendai.  The stadium was torn down a few years later and the Arakawa Comprehensive Sports Center was built on the site.

The 71 OB player cards make up most of the set.  It includes a lot of the players you'd expect - Michio Arito, Choji Murata, Satoru Komiyama, Tomohiro Kuroki, Saburo Ohmura, Norifumi Nishimura, Toshiki Imae and Shunsuke Watanabe are all in the set.  It appears to be skewed a bit more towards players from the 90's and 00's more than the previous sets were.  I was bit surprised to see Masaaki Koyama in the set - I hadn't realized he'd still been with the team after they were bought by Lotte.  Isao Harimoto is also in the set although he spent just two seasons with the team.  I'm pretty sure there are no former Lotte players who are still active with other teams included in the set (with the exception of a couple guys who might still be playing in indy ball in Japan).

There are a lot of players who you might have expected to be in the set though who aren't.  First of all, since as I mentioned no player there were no cards of anyone wearing Mainichi, Daimai or Tokyo Orions, there's no cards of any player who played for the team before Lotte bought them.  Kazuhiro Yamauchi is probably the biggest name left out but it also means there's no cards for Kaoru Betto, Kihachi Enomoto, Kenjiro Tamiya or Atsushi Aramaki.  There are cards of a number of players who later became managers - Nishimura and Tadahito Iguchi for example - but no cards of guys who only wore the Lotte uniform as a manager.  So no Kazuhisa Inao, Masaichi Kaneda or Koji Yamamoto.  And no Bobby Valentine either.  In fact there's no foreign players at all in the set so no Lees - Leron, Leon or Seung-Yuop - no Julio Franco and no George Altman.  The biggest names I noticed missing from players in the Lotte era were Tomohiro Kaneda, Shinichi Eto, Jinten Haku (aka Baek In-chun), Hideki Irabu, Hideo Iijima (the Olympic sprinter turned pinch runner) and Hiromitsu Ochiai.  All of the players I've mentioned here - the managers, the foreign players and the other Lotte players - were all in the 2008 BBM Lotte 40th Anniversary set.

Ochiai hasn't had a baseball card in ten years now - this is the third of the four "History" sets that he could have been expected to appear in.  I kind of wonder if some of the other players like Tomohiro Kaneda, Shinichi Eto and Hideki Irabu are missing from the set because they've passed away and can't sign autographs.  Each of the other "History" sets has a handful of deceased players but as far as I can tell there aren't any in this set.

The cards use the same design as the previous sets and are quite attractive.  It's kind of odd - the Carp set featured full bleed photos but the Giants and Dragons cards had a white border.  These cards go back to the full bleed.  There's a handful of black and white photos in the set.  There are good photos in the set but I think on the whole the photos are a little less interesting than in the previous "History" sets.  Here's some example cards:

There's 12 active players included in the set and just like in the previous sets they seem like an afterthought.  The subset includes Ayumu Ishikawa, Takashi Ogino, Katsuya Kakunaka, Manabu Mima and Roki Sasaki (who's name is misspelled "Sakaki").  Once again there's no foreign players so no Brandon Laird or Leonys Martin.  Here's a couple example cards:

So I guess my feeling about this set is that I like it but not as much as I've liked the previous "History" sets.  It's a good set but it could have been better.

As always you can see all the cards over at Jambalaya.