I've mentioned a number of times (as recently as yesterday) that cards issued with magazines are one of the two biggest unknown areas in Japanese baseball cards (the other being team issued cards).  One example of this is an item I came across on Yahoo! Japan Auctions a few months back.  Ryan picked it up for me (and eventually found one for himself too) and included it with the box he sent me last week.
Here's what the unopened item looks like: 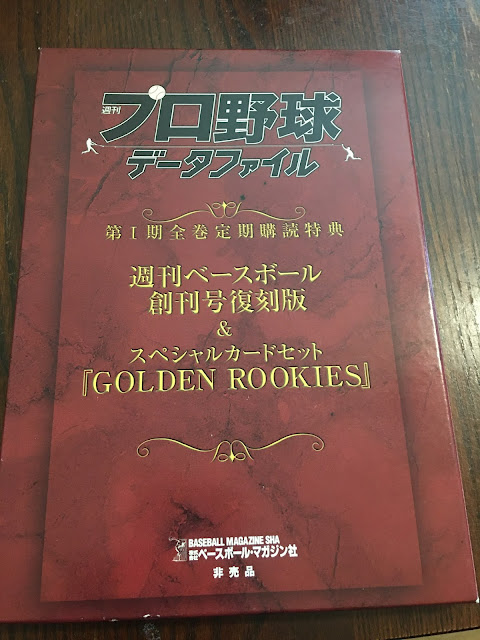 Here's what it looks like when you open it up: 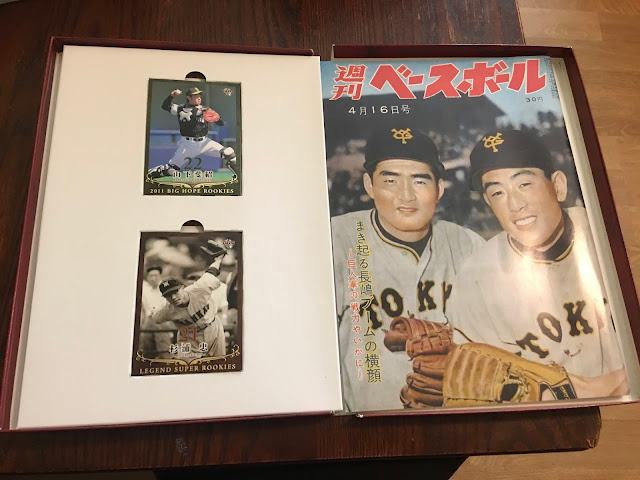 On the right is a reprint of the first ever issue of Shukan (Weekly) Baseball.  The cover date is April 16th, 1958.  On the left is a 24 card base set called "Golden Rookies", split into two 12 card subsets - "2011 Big Hope Rookies" and "Legend Super Rookies".  The "2011 Big Hope Rookies" were all the first round picks from the 2010 draft which includes Tetsuto Yamada, Yudai Ohno and Yuki Saitoh.  The "Legend Super Rookies" feature one Rookie Of The Year from each of the 12 teams (Kintetsu is included, not Rakuten) including Shigeo Nagashima, Akinobu Okada, Kazuhisa Inao and Kazuyoshi Tatsunami.
According to Ryan, this was a gift to new subscribers to BBM's "Pro Yakyu Data File" magazine back in 2011.  Personally, I think this beats the hell out of the football phones that Sports Illustrated used to give away back in the 1990's.
Since this is such an oddball little set, I thought I'd share all 24 cards from the set.  First up are the "2011 Big Hope Rookies":

And now the 12 "Legend Super Rookies":

One last thing about this set - when Deanna Rubin sent me a big bunch of Japanese baseball stuff a few months back there was an ad for this set mixed in with the baseball cards she included: 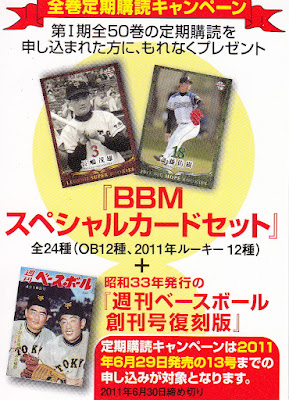