Card Of The Week October 24

50 years ago yesterday the Baltimore Orioles kicked off their tour of Japan with an 8-4 victory over the Yomiuri Giants at Korakuen Stadium in Tokyo.  It was the first of 18 games the Orioles would play against Japanese teams over the next month or so.  This tour is probably the closest we've ever had to everyone's dream of a set of games between the NPB and MLB Champions - a true "World Series".  The Orioles had just lost the 1971 World Series in seven games to the Pittsburgh Pirates and would play 11 games against Yomiuri, who had just won their seventh straight Nippon Series.  The Orioles went undefeated in their games against the Giants, going 8-0-3.  To top it off, Pat Dobson, one of the Birds' four 20 game winners that year, threw a no-hitter against Yomiuri on November 2nd.  The O's went 4-2-1 in their games against other Japanese teams which I think were All Star teams for a couple of games and combined rosters from two teams (Giants & Carp, Giants & Dragons, Giants & Lions) for a couple other games.

This was neither the first nor last tour of Japan by an MLB team - in fact the Orioles would return following the 1984 season - but it is significant in that it made its appearance on a couple baseball cards.  The 1975 NST Mr Giants set included three cards featuring Shigeo Nagashima with at least one member of the Orioles.  Card #56 shows Nagashima leading off first with Boog Powell behind him, card #59 shows Nagashima and Brooks Robinson with a traditional Japanese drum and card #62 shows Nagashima with Robinson, Earl Weaver and an unidentified member of the press (I assume).  I don't have cards #59 and #62 but I do have the Boog Powell card: 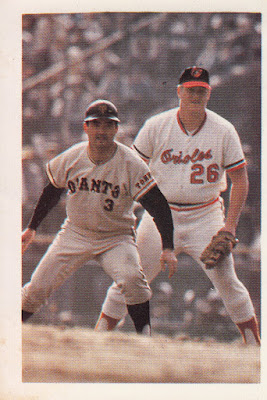 Powell has had a barbecue stand, Boog's Barbecue, at Oriole Park at Camden Yards ever since the park opened in 1992.  He used to sign autographs there but I don't know how often he shows up anymore.  I wonder what he'd say if I handed him this card to sign?