Card Of The Week October 17

Seiya Suzuki is on tear.  Again.
He hit two home runs today against the Tigers which gives him five in his last five games.  This is after he had 10+ home runs during the month of September.  His timing couldn't be better as the Carp are making a last minute run at the Giants for third place (and a spot in the Climax Series).  The Carp have gone 9-1 over their last 10 games while Yomiuri has dropped their last 10 decisions and are 0-9-1 in their last ten games.  This has allowed Hiroshima to crawl to just 2.5 games behind the Giants after being something like 10 games back a month ago.
Unfortunately for the Carp we're now in the garbage part of the season where all the rain outs from earlier in the year are being made up so there's an uneven number of games left.  The Carp have some control over their destiny, however, as they have seven games remaining while the Giants only have four.
Here's a card of Suzuki from the 2019 BBM Icons - Teenage Memories set (#21): 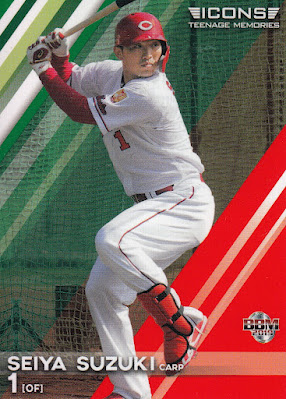