Card Of The Week January 8

Several years back I discovered that the Lotte Orions had employed a former Olympic sprinter named Hideo Iijima as a pinch runner between 1969 and 1971.  I compared Iijima to Herb Washington, the sprinter that Charlie O. Finley had brought in to pinch run for his Oakland A's in 1974 and 1975.  I hadn't meant to suggest that Finley had gotten the idea from Lotte (although apparently I left people with that impression) but I'm starting to wonder now.

While doing the research on my post on Japanese teams doing Spring Training in the US I came across a column by Robert Markus of the Chicago Tribune which mentioned a game between Lotte and the A's in Arizona (although it specifically mentioned that Finley wasn't at the game) in March of 1971 - which was when Iijima was with Lotte.  Is it possible that Finley saw or heard about Iijima that spring and that's where he got the idea to hire a sprinter as a pinch runner?

The answer is...I have no idea for sure.  Finley has passed away so we can't ask him.  Probably the biggest argument against it is that Finley started toying with the idea of a full time pinch runner with Allan Lewis in 1967.  However Lewis was an actual baseball player who occasionally batted and appeared in the field - kind of like how the Yomiuri Giants utilized Takahiro Suzuki over his career.

I had also had a concern about whether or not Iijima had actually come to the States with the team for Spring Training in 1971 - he only appeared in six games with the ichi-gun team that season.  However while doing some research for this post, I discovered that the Orions had done Spring Training in the States in 1970 as well.  Since Iijima had appeared in 61 games in 1969 and 50 games in 1970, there's a decent chance he came to the US with the team that spring.  So I think the answer is actually maybe. 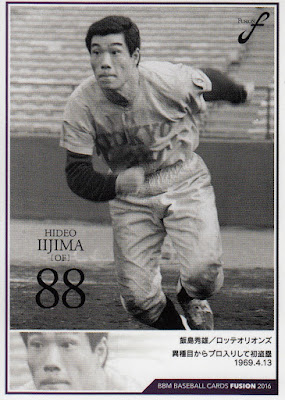 That was a pretty "revolutionary" idea if you think about it. It is too bad that there are so few sets of significance in the dead-zone.

Its an interesting question about whether or not Finley got the idea to use Washington from Lotte, I had no idea about that before.


I have that 75 Topps card of Washington in my collection somewhere, its a classic. I wonder if a team might try reviving that experiment someday, seems it would be more suited to Japan's style of play than in the US.