Card Of The Week January 22

I've been trying to follow the Australian Baseball League this winter and I've been listening to the Strike Zone Australia podcast lately.  It's a weekly podcast with player and coach interviews and a wrap up of each week's action.  A couple weeks back they had an interview with former MLB and NPB pitcher Micheal Nakamura.  Nakamura had played for the Fighters and Giants between 2005 and 2011.  He was released by the Giants after the 2011 season and was considering signing with either the Fighters or Lions for the 2012 season.  He ultimately decided on the Lions for what I thought was an interesting reason - the Lions farm team play right next to the Seibu Dome so he wouldn't have to move away from his family if he was sent to them.  The Fighters' farm team plays in Kamagaya which is just east of Tokyo which is quite a ways from Sapporo.  It was probably a good choice on his part as he appeared in 17 games with the top team but 23 games with the farm team.  He retired following the 2012 season.

His only BBM cards with the Lions were from the 2012 Lions team set.  He had a card in the "Newcomers" subset as well as a regular player card (#L13): 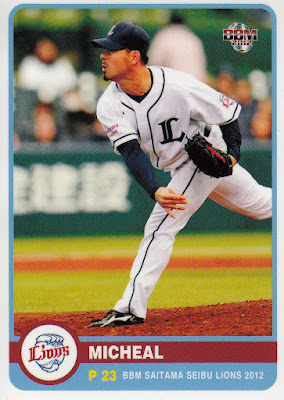