Card Of The Week January 15

When Prince Fielder retired last summer due to a herniated disk in his neck, I immediately thought of former Hanshin Tigers outfielder Norihiro Akahoshi.  Akahoshi had been forced to retire in 2009 after suffering a similar neck injury.

BBM did a box set dedicated to Akahoshi in early 2010 called "Red Star 53".  There's a lot of great photos in the set (which you can see at Jambalaya) but one of my favorites is this one of him in Sydney, Australia:

The back of the card indicates that the photo was taken in 2003.  I think the Tigers did a trip to Australia in November or December of that year in celebration of their Central League pennant that season.

Twenty years ago Wednesday I was in Sydney myself and took a similar picture of the Opera House: 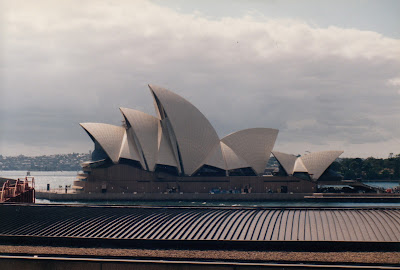 That is a gorgeous card! You don't see the Sydney Opera House show up on baseball cards too often, eh?

Not even on Australian baseball cards!