Card Of The Week January 1

Happy New Year to everyone!

2016 was bookended for me by a couple business trips to Arizona.  I spent about two weeks in Yuma back at the end of January and beginning of February and had two trips to the Tucson area in late October/early November.  I was able to combine all three trips with some baseball - the first trip gave me the Arizona Winter League in Yuma and the Fighters training camp in Peoria while the second and third trips allowed me to see a couple Arizona Fall League games, something I've always wanted to do since I used to collect minor league baseball cards in the 1990's.

My first AFL game was in Mesa on October 24th between the Mesa Solar Sox and the Surprise Saguaros.  This was the day before the World Series started and is significant because it was the last tune-up game that Kyle Schwarber played in before being activated by the Cubs for the Series.  The other AFL game I went to was on November 3rd between the Scottsdale Scorpions and the Glendale Desert Dogs at Camelback Stadium in Glendale.  I got to see Tim Tebow play in that game.  I don't think it's fair to judge a player by one game and I'm certainly not qualified to judge a player's potential but he didn't have a particularly impressive game.  He went 0 for 3 and I don't think he hit the ball out of the infield in any of the at bats.

I was only able to figure out one person in uniform for either team in either AFL game that had a connection at all to Japan - Scottsdale Scorpion coach Damon Minor.  Minor played for the Tohoku Rakuten Golden Eagles in the their inaugural year of 2005.  He spent most of the year with the farm team, however, as he only got into 6 games with the ichi-gun squad.  Here's his card from the 2005 BBM Eagles box set (#E39): 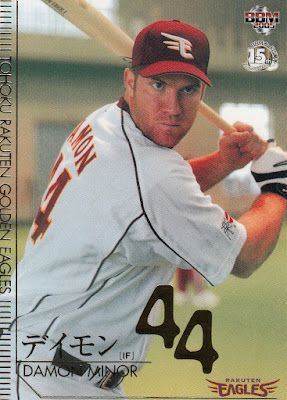 Here's a couple not particularly good photos I took of him in Scottsdale's dugout.  That's Steve Schrenk from the Phillies organization on his left. 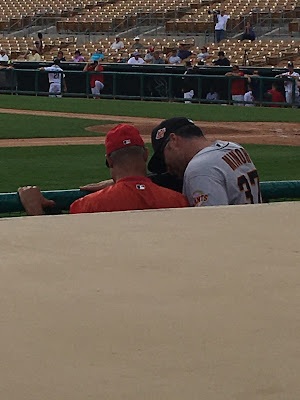 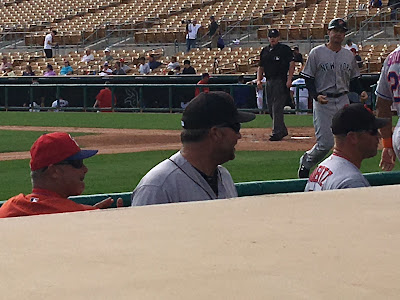 Minor's brother Ryan was one of the top prospects for the Orioles in the late 1990's.  The Orioles future was expected be Minor, Calvin Pickering and Matt Riley.  The best laid plans...
Posted by NPB Card Guy at 8:41 PM

Any other trips planned back this year? I always impressed with how you can find all these cards.

I'm tentatively planning a trip to the WBC finals in LA in March but there's a couple things that could prevent me from going. Other than that, nothing planned. If the Shikoku Island All Stars play in New Jersey again I'll probably try to get up there.