Former Hankyu Brave (as well as New York & San Francisco Giants, St Louis Cardinal, Los Angeles Dodger and Cincinnati Red) Daryl Spencer has passed away at the age of 88.  Spencer joined Hankyu in 1964 after a 10 year MLB career - he hit the first home run in San Francisco Giants history.  He spent five years with Hankyu before retiring, leading them to the PL pennant in 1967 and 1968 (they lost to the Yomiuri Giants both times).  The Braves coaxed him back after two years of retirement to be a player/coach at age 42.  He spent the 1971 and 1972 seasons with Hankyu who won the PL pennant both those years before losing to Giants in Series both times (five of the nine consecutive championships the Giants won between 1965 and 1973 were against the Braves).  He made the Best 9 team in both 1964 and 1965 and made the All Star team those two seasons as well.  His best season was probably 1965 when he hit .311 with 38 home runs and lead the league in OBP with .423.

Spencer had the misfortune to spend most of his career in Japan in the "dead zone" between the end of menko in 1964 and Calbee's first set in 1973 where there were very few baseball cards produced in Japan.  As a result, I'm only aware of one Japanese card of him during his career - a 1964 Marukami menko card (from the "JCM 14g" set).  I don't have this card but I swiped the image of the front and back from the Trading Card DB checklist for the set (image was loaded by user bk930): 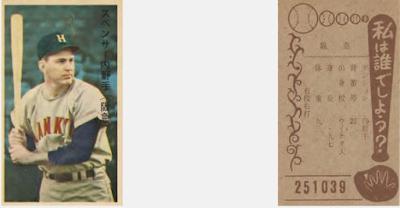 As far as I can tell, he's only had four base set cards in any of BBM's issues over the past 25 years:


Based on the uniform the photo on the Great Numbers card is from the 1972 season.  There's a Giants player in the dugout so it's possible that the photo was taken during the 1972 Nippon Series.  Given that he's wearing a home uniform, I think the photo is from Game Four, where he pinch hit for Hisashi Yamada in the fifth inning.  This would be the last at bat of his professional career.  If I'm understanding the Google translation correctly, he got a hit.
Posted by NPB Card Guy at 8:09 PM