Earlier this year BBM issued an OB team set for the Carp called "Carp History 1950-2020".  It was a very attractive set and apparently was popular enough that BBM issued a similar set for the Yomiuri Giants called "Giants History 1934-2020" in mid-September.  Like the Carp set, this was a pack based set with a 90 card base set split into three groups of cards - "Giants History", OB players and active players.

The bulk of the set is the cards of the OB players.  There are 71 of these, one more than there had been in the Carp set.  As always this includes both retired players as well as active former Giants (such as Tetsuya Utsmui and Hisayoshi Chono).  The players include a lot of the names you'd expect - Sadaharu Oh, Nagashima, Kawakami, Hideki Matsui, Koji Uehara, Shinnosuke Abe, Yoshinobu Takahashi, Tatsunori Hara, Isa Harimoto, Isao Shibata, Tsuneo Horiuchi, Masumi Kuwata and Suguru Egawa - but there's several notable exceptions.  Masaichi Kaneda is not in the set which really shouldn't be a surprise as he didn't show up in either of the earlier Anniversary sets either.  Hiromitsu Ochiai and Kazuhiro Kiyohara aren't in the set either although again that's not much of a surprise - Ochiai hasn't appeared on a baseball card since the Dragons fired him as manager in 2011 and I think BBM's been avoiding Kiyohara due to his legal issues.  Most of the players (or managers) that I was surprised to see excluded are from the 1940's and 1950's - Hall Of Famers Chiba, Noburo Aota, Hideo Fujimoto, Takehiko Bessho, Victor Starffin, Osamu Mihara, Shosei Go and Haruyasu Nakajima, all of whom were in at least one of the earlier Anniversary sets.  The only players from before 1950 are Eiji Sawamura and Kamakami.  Some of the later players who are missing include Masahiko (Masaaki) Mori and Shigeru Kobayashi.  The player selection (as usual) tends towards more recent players.  There's only one foreign player included - Alex Ramirez - so guys like Wally Yonamine, Tuffy Rhodes and Warren Cromartie were left out as well.

On the plus side - this set apparently includes the first ever BBM card of Katsuya Sugawara who pitched for the team from 1966 to 1973.  It looks like this is his first baseball card since the 1973-74 Calbee set.  Besides the Calbee cards he had a couple oddball cards in the late 60's and early 70's.  Despite having played for the V9 Giants he was not in Epoch's set for that team from 2014.  (I mention this as a curiosity and not as a reason to run out and buy the set.  I just find it interesting that with all the OB sets BBM has done over the past 15 years or so there are still players from the 60's and 70's who haven't had cards.)

The backs of the cards include a feature that BBM had included on the Carp cards as well.  There's a series of dots that represent every season between 1934 and 2019.  The seasons that the player played for the Giants are colored orange while all the other seasons are colored black.  There's a separate dot below the line of dots for any year that the player managed the team - this allows for player-managers although there aren't any in this set.  Here's the back of Shigeo Nagashima's card as an example: 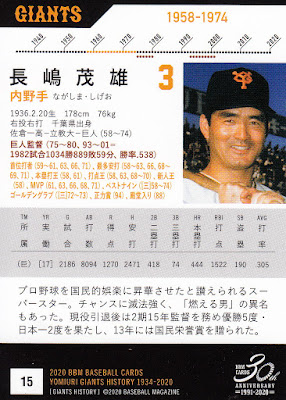 The active player subset only includes 12 cards, two fewer than the Carp set.  It pretty much includes who you'd expect - Hayato Sakamoto, Tomoyuki Sugano, Kazuma Okamoto, Yoshihiro Maru and Yoshiyuki Kamei for example.  There's one foreign player - Gerardo Parra - along with a player who was active with the Giants when the set went to press at the end of July but is now an OB player - Hirokazu Sawamura, who was traded to the Marines in early September, right around the time this set was released.  Here's a couple examples:

As you've probably guessed, I like the set (although I am a sucker for the OB team sets).  You can check out all the cards over at Jambalaya as usual.

Abe and Matsui cards are quite nice here.

Yeah, BBM can have some really good posed shots on occasion.