Card Of The Week October 11

Last week's episode of the Baseball.com.au podcast featured a long interview with Michael Nakamura who played for the Twins and Blue Jays in MLB and the Fighters, Giants and Lions in MLB.  It was a fascinating interview and well worth a listen.

The one story he told that really stood out to me concerned how he ended up joining the Fighters.  Nakamura is the son of a Japanese father and an Australian mother.  He was born in Japan and grew up in Australia.  He was a fan of NPB growing up and had hoped to someday play in the league.  He decided to try his luck in Japan after the 2004 season.  He and his agent had reached an agreement on a two year contract with the Hanshin Tigers but the Tigers ultimately backed out of the deal.  The Chiba Lotte Marines held a tryout for him that went very well and he and the team were on the same page about his salary so it looked like they would be making a deal.  The Marines had a suggestion though - since Nakamura was a dual citizen of Japan and Australia, would he be willing to enter NPB as a Japanese citizen?  He'd be subject to the draft but it would mean that he would not count as a foreign player on the roster.  Nakamura agreed and the Marines promised to draft him in the upcoming draft (in mid-November of 2004).

Before leaving Japan, Nakamura had a tryout with the Fighters as well which also went well although his feeling was that it was kind of unnecessary since he expected to be drafted by the Marines.  However to his surprise (and probably Lotte's as well) he was drafted by the Fighters instead!

It's kind of interesting how this happened.  In 2004 (well, not JUST 2004 - this happened in a number of years) NPB teams were allowed to reach agreements with players before the draft.  I don't fully understand this process but I believe these players were referred to a "kibouwaki".  If a team had a kibouwaki player in a round of the draft they would forfeit a pick in the following round.  So if a team announced they'd signed a kibouwaki player in the first round they wouldn't have another pick until the third round.  I'm probably getting the details of this wrong but the important part is that signing the kibouwaki player essentially costs the team two rounds in the draft.  In 2004 the Marines actually signed TWO kibouwaki players - Yasutomo Kubo and Satoshi Tejima - and therefore didn't have a pick in the draft until the fourth round (as I said I don't fully understand all the details of this so this doesn't quite make sense).  I think they had intended to pick Nakamura with the ninth pick in the fourth round but the Fighters took him with the seventh pick.

Nakamura didn't say so in the interview but I suspect it took him a little bit to come to terms with Nippon-Ham as he was not in BBM's Rookie Edition set in 2005 while all the other draft picks were.  Ultimately though he really enjoyed his four years in Hokkaido.  One of the highlights of his time with the Fighters was winning the 2006 Nippon Series in five games.  He appeared in all four of the games that the Fighters won and notched saves in Games Two, Four and Five.  Here's his card from the 2006 BBM Nippon Series set (#S08) showing him raising his arms in triumph - I don't know for sure but I suspect that he's just gotten Dragons pinch hitter Alex Ochoa to fly out for the final out in Game Five: 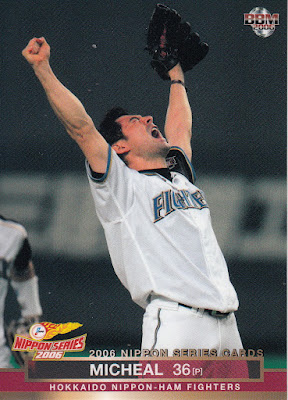