Card Of The Week October 25

Lightning struck twice last week in Tokorozawa.  On Tuesday night, the Lions and Marines were tied at one with two outs in the bottom of the ninth.  Kakeru Yamanobe was batting for the Lions against Naoya Masuda of the Marines with Shota Tonosaki on second.  Yamanobe hit a flair into shallow right field that both second baseman Kenji Nishimaki and right fielder Leonys Martin both went for and the two fielders got tangled up together with the ball bouncing off Martin's glove which allowed Tonosaki to score the winning run.  The Lions walked off to a 2-1 win.

The following night it was deja vu all over again.  The Lions and Marines were again tied at one with two outs in the bottom of the ninth.  Masuda was again on the mound with Tonosaki on second and Yamanobe at the plate - the one difference was that Fumikazu Kimura was on first.  Yamanobe grounded a single past second baseman Shogo Nakamura into right field which allowed Tonosaki to again score the winning run.  Tonosaki got his hand on the plate just before catcher Tatsuhiro Tamura slapped the tag on him.  The Marines asked for a video review but the umpires upheld the safe call and the Lions walked off again to a 2-1 victory.

Not only did Naoya Masuda take the loss two nights in a row but Lions reliever Tatsushi Masuda (no relation) got the win both nights.
Here are cards of Tonosaki and Yamanobe from Epoch's "Lions Rookies & Stars" sets from 2018 (#47) and 2020 (#22) respectively. 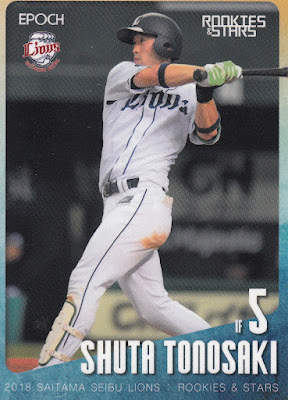 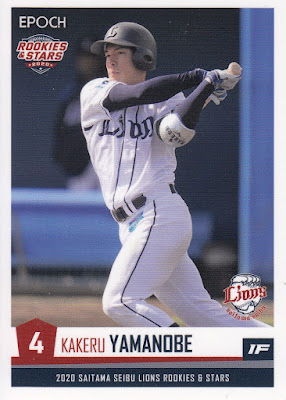