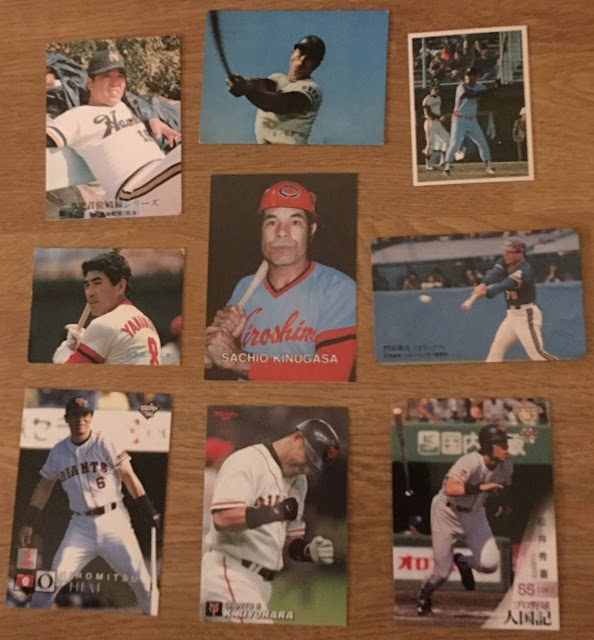 There's a guy on Twitter named George Bennett who periodically tweets out photos of "carpets o'cards" - a group of baseball cards laid out that share some sort of theme.  He did one a while back with all the 500 home run hitters from MLB arranged by the number of at bats it took them to reach the milestone.  I was inspired to emulate him with all the 500 home run hitters from NPB.  I arranged them in chronological order of them reaching the milestone though, mostly because I wasn't sure I could find the at bat totals.

I wanted to use a card from the same year that the player hit home run number 500 but that wasn't possible in the case of Katsuya Nomura and Sadaharu Oh as I don't have any cards from 1971 or 1972 respectively (there's a dry period in Japanese baseball card history between the end of menko in 1964 and the start of Calbee in 1973 where there were very few cards published).  And I have to admit to being surprised that Nomura reached 500 home runs before Oh did.  I don't think Oh passed Nomura for the career home run lead until 1973 or 1974.

Here's each card along with the date the player got his 500th home run: