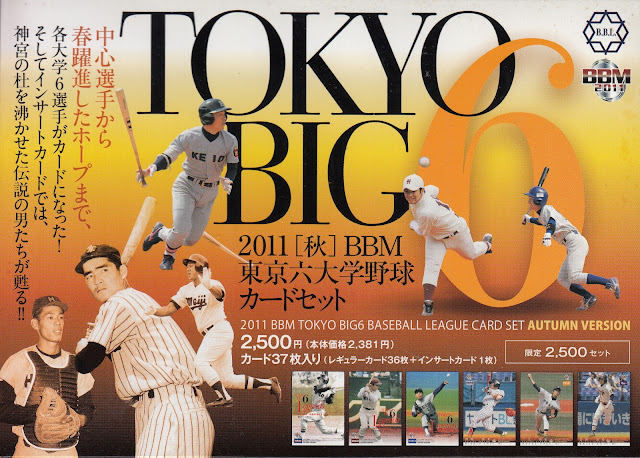 The set contained 37 cards - a 36 card base set plus one of 12 possible insert cards.  The insert cards were either one of six "Tokyo Big 6 Heroes" cards (one active player per school) or one of six "Tokyo Big 6 Legends" cards (one OB player per school).  For the first time the base set did not include team cards so all 36 cards were player cards (six per team).

This set marks the final appearance in a collegiate set for Yusuke Nomura.  I've frequently suggested  that BBM started doing collegiate sets so that they could make cards of Yuki Saitoh but an argument could be made (although not a particularly serious one) that they wanted to make cards of Nomura instead.  Nomura had cards in seven of BBM's first eight Tokyo Big Six sets - he had the most cards of any player in the sets.  (Saitoh had five cards which tied him for third place with nine other players.  The player with the second most cards, Keisuke Okazaki of Rikkio, never played in NPB.  His final collegiate card was also in this set.)

Here's the list of future NPB players from the set:

Here's each of their cards from the set as well as a card of them in NPB.  As usual I tried to get the most recent card of theirs that I hadn't already shown when possible.  I'm also showing Mikami's "Tokyo Big Six Heroes" card since I pulled that from the box I bought.  Itoh and Shimauchi also had cards in that insert set but I don't have those.