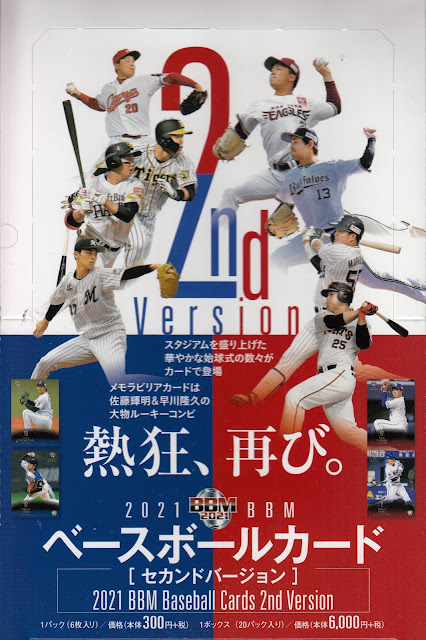 Size: 318 cards (cards numbered 337-600, the 18 cards of "Ceremonial First Pitch" subset are separately numbered FP01-FP18and 36 cards for the "Cross Torrent" subset are separately numbered CT37-CT72)
Cards Per Team: 19 (team card + 18 players)
Team Card Theme: Early Season Candids
Number Of Leader Cards: N/A
Checklists: 0
Subsets: 1st Version Update (36), Ceremonial First Pitch (18), Cross Torrent (36)
Inserts: New Sensation (12), Show Man (12), Phantom (12, #'d to 25), Foil Picturesque (12, #'d to 15)
Memorabilia Cards: Jersey cards for Takahisa Hayakawa and Teruaki Satoh, both of which are #'d to 200 along with patch versions that are #'d to 20 each.  There's also a combination jersey card featuring both Hayakawa and Satoh which is #'d to 10 along with a patch version of the combination card that is #'d to 5.  There are autographed cards for players that use a landscape version of the "Cross Torrent" cards that have print runs between 5 and 60 cards and other autograph cards that are #'d to 5.  There are also autographed "buy back" cards of Tomoya Mori.  There are autographed versions of eight of the "Ceremonial First Pitch History" cards with print runs between 25 and 27 with a silver parallel autographed version that are #'d to 5.  There are also 21 players with autograph cards using the format for the autograph cards in the player's team set - these are mostly for players who BBM was not able to include autograph cards in their team set due to COVID restrictions.
Parallels: 12 cards (one per team) have a "Secret" version which is a short printed photo variation.  12 other cards (also one per team) have an "Ultra Secret" version which is an even shorter printed photo variation.  70-ish of the player cards have four different facsimile autograph parallels - silver (unnumbered), gold (#'d to 100), hologram (#'d to 50), and red (#'d to 25) .  Each "Cross Torrent" card has two parallels - one that's #'d to 100 and a "1 of 1" version.  There are five different parallels for the "Ceremonial First Pitch" cards - holo (#'d to 300), silver (#'d to 200), gold (#'d to 100), silver holo (#'d to 50) and gold holo (#'d to 25).  The "New Sensation" inserts have a parallel version that is numbered to 100 while the "Show Man" cards have one parallel numbered to 150.
Notable Rookies: Yukikazu Sano


After a departure from the norm last year, BBM's 2nd Version set returned to form this year.  Once again there are 216 "regular" cards (18 per team) - unlike the 180 (15 per team) last year - and only the three usual subsets (1st Version Update, Cross Torrent and Ceremonial First Pitch) instead of the six last year - 1st Version Update, Cross Blossom, Ceremonial First Pitch History, Proud Ace, Big Archist and Ground Master.  Oh, and the Ceremonial First Pitch cards show pitches from the current year this time - last year's set had "historic" first pitches since by the time the set went to press the season had only been going on for about a week and a half.
As usual the "regular" cards are pretty attractive.  The photo selection continues the improvement that BBM started in this year's 1st Version set although there's still more "pitchers pitching, batters batting and catcher catching" photos than I'd like although it'd be tough for BBM to not have ANY cards using those poses.  Here's a bunch of examples: