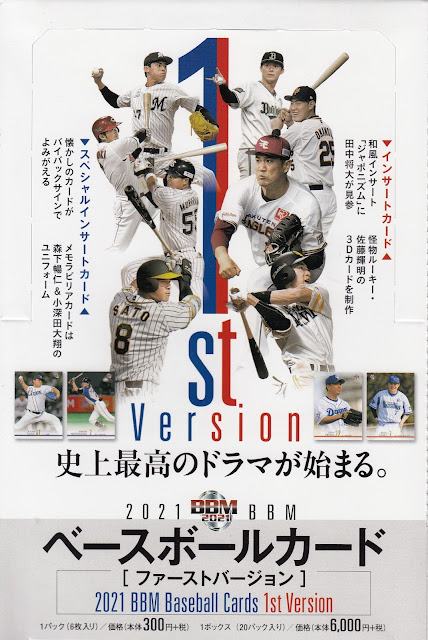 Size: 372 cards numbered 1-336, CT01-CT36
Cards Per Team:  28 (team card, manager + 26 players)
Team Card Theme:  Spring Training
Number Of Leader Cards:  N/A
Checklists:  None
Subsets:  Cross Torrent (36)
Inserts:  Japonism (12), Growing Up (12), 3D Cross Torrent (12, #'d to 25), Cross Foil Signing (12, #'d to 15)
Memorabilia Cards: Jersey cards for Hiroto Kubokata and Masato Morishita.  Each jersey card is serially numbered to 200 plus a parallel patch version numbered to 30.  There is also a combination jersey card numbered to 10 with a parallel patch version numbered to 5.  There are four different types of autographed card available - "Cross Signature" (which includes several cards with multiple autographs), "Special Signature", "Japonism" and "Buyback Autographs".  The last features "buyback" BBM cards for eight players - Kodai Senga, Ayumu Ishikawa, Ginji, Sho Nakata, T-Okada, Yudai Ohno, Yasuaki Yamasaki and Tetsuto Yamada.
Parallels:  12 regular player cards have a "secret" alternate photo version.  Another 13 have a "ultra secret" alternate photo version (there are two Dragons with "ultra secret" cards).  108 regular players cards (9 per team) have facsimile autograph parallels - silver, gold (#'d to 100), holograph (#'d to 50), and red (#'d to 25) - this includes the "secret" versions of the cards as well.  (I think the 1st round picks for each team are included in the 108 players.)  74 of the rookie cards (which I think is all of them) have five numbered parallel versions - "Silver Board" (numbered to 200), "Holo Silver Board" (numbered to 100), "Green Foil" (numbered to 50), "Holo Foil" (numbered to 25) and "Sky Blue Foil" (1 of 1).  The "Cross Torrent" cards have two parallel versions - "Holo paper" (numbered to 100) and  "1 of 1".  There is a "Gold Leaf" parallel version for the "Growing Up" (#'d to 100) and three parallel versions for the "Japonism" inserts - "Blue Foil" (numbered to 200), "Pink Foil" (numbered to 100) and "Sky Blue Foil" (1 of 1).
Notable Rookies: Teruaki Sato, Takahisa Hayakawa, Hiromi Itoh, Ryoji Kuribayashi, Shugo Maki

BBM published this year's edition of their 1st Version set a few weeks ago.  This is BBM's biggest set of the year and while it's really just the first half of their "flagship" set it can stand on its own.  This is now the seventh year in a row that it has had a 372 card base set - 324 "regular" cards for the players and managers (27 per team), 12 team checklist cards and 36 cross set subset cards.
I had an unusual problem this year in picking out the cards to highlight in this post - the photo selection was so good it was difficult to select sample cards.  I usually try to only have six or seven examples of the "regular" cards - this post I'm using eleven!  Now to be clear, there are still an awful lot of "pitchers pitching, batters batting and catcher catching" shots but there are a lot more attractive photos in this set than BBM has had in recent years - even more so than last year's set.  See what you think of these:

Despite all the good photos, however, they have still fallen back into some of their bad habits:
The backs of the cards look pretty much the same as they have for years now:
The cutoff for this set is mid-February and as a result, there's a whole bunch of foreign players who aren't in the set because they hadn't been able to get to Japan yet.  Pretty much all the foreign players who appear in the set played in Japan last year - I think Kevin Cron of the Carp is the only new foreign player.  This means guys like Mel Rojas, Jr., Justin Smoak, Eric Thames, Mike Gerber, Brandon Dixon and Rusney Castillo are not in the set.  I'd be curious if the "1st Version Update" subset for the 2nd Version set will be a little larger than usual to accommodate these players.
I do have my usual complaint that the set is too small.  Because there's only 26 cards for players on each team AND BBM insists on having cards of all the non-ikusei rookies on each team, there's only about 20 established players for each team who get cards.  So lost in the shuffle this year are guys like Yuki Takahashi of the Giants and Joe Gunkel of the Tigers.  Curiously, BBM decided they should include a card for Daisuke Matsuzaka, who hasn't thrown a pitch in anger (or any other emotion) since 2019.  Brandon Dickson of the Buffaloes (as opposed to Brandon Dixon of the Eagles) has a card despite the fact that he will forego playing in Japan this year although since he only recently made that decision, it's not surprising that BBM included him in the set.
The theme for the team cards is "training camp photos" again and the photos are ok.  Several of them just show groups of players milling around.  There are a couple that featured a recognizable player (or manager) that I liked:

For the tenth time in the past twelve years BBM is doing a a cross-set subset in at least their 1st and 2nd Versions sets.  This year's version is called "Cross Torrent" and I'm kind of struggling to stifle a yawn.  They're not unattractive but I'm just getting tired of the premise.  As always, there's 36 cards (3 per team) in this subset and you should expect another 36 in the 2nd Version set.
As always, the backs shows the same photos with the original background:
I got one of the insert sets along with my base set.  There's been a 12 card insert set featuring rookies or young players with the 1st Version set for the last couple years.  This year's version is called "Growing Up" and features one player from each team.  Eight of the players are rookies - in fact they're the first round picks for their teams.  Of the other four players, one of them - Richard Sunagawa of the Hawks - didn't have a card in the base set.
As always you can see all the cards (including inserts, parallels and "secret versions") over at Jambalaya.
I want to close this post by pointing out that while I'm very pleased that BBM has improved their photo selection, they still have room for improvement.  Teruaki Sato is the hottest rookie in NPB this year and he's playing for the hottest team in the Central League.  Since he's in the "Cross Torrent" subset he has two cards in the base set and he's also in the "Growing Up" insert set.  For God only knows what reason, BBM chose to use almost the exact same pose on all three of these cards:
Posted by NPB Card Guy at 9:08 PM