On Friday Tigers rookie sensation Teruaki Sato hit three home runs against the Saitama Seibu Lions.  Sato became only the third rookie to ever hit three home runs in a game.  I haven't been able to figure out who the first rookie to do it was but the second was Shigeo Nagashima in 1958.  So Sato did something that no other rookie has done for 63 years.

Since I've showed all the cards I have of Sato with the Tigers so far in my posts for BBM's Rookie Edition and 1st Version sets this year, I thought I'd share a rookie card of Nagashima from the 1958 Doyusha JCM 30a set: 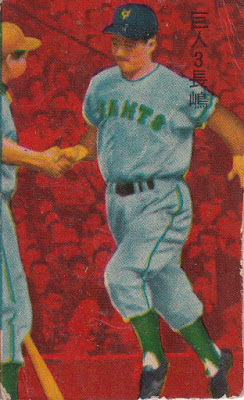