Card Of The Week May 2

Last weekend Masahiro Tanaka of the Eagles won his first game in Japan since 2013 and this past week Wei-yin Chen of the Tigers won his first NPB game since 2011, beating his former team the Dragons at Nagoya Dome*.  (H/T NPB Reddit)

*Yeah, I know it has a corporate name now but until they send me a check, I'm not using it.

The big difference between Tanaka and Chen is that Tanaka spent 2020 in MLB with the Yankees while Chen actually played in Japan last year, making four starts with the Chiba Lotte Marines and going 0-3 despite posting an ERA of 2.42.  Here's his 2019 BBM Fusion card (#608) from the set's 1st Version Update subset - his first Japanese card since 2011: 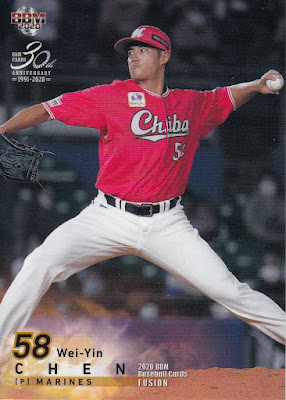