Card Of The Week May 9

Lee Dae-Ho of the KBO's Lotte Giants has had quite a career.  He's in his 21st professional season and has played in Korea (2001-11, 2017-present with Lotte), Japan (2012-13 with Orix and 2014-15 with Softbank) and the US (2016 with Seattle).  He's won two Triple Crowns, six Golden Glove awards, two All Star Game MVPs and a league MVP award in Korea along with an RBI title, two Best 9 awards and a Nippon Series MVP in Japan.  He's played on a Nippon Series champion (the 2015 Fukuoka Softbank Hawks), an Olympic Gold Medal winning team (2008 Beijing Games) and a Premier 12 Gold winner (2015).  He's played for Korea in three World Baseball Classics - 2009, 2013 and 2017 - and won Silver with the team in 2009.  He actually started his professional career as a pitcher but was converted to a position player after hurting his shoulder in his first season.  He's played both first and third base but the past few seasons he is mostly a DH.  At 38 years old, he is the oldest player in the KBO.

You would think that at this point in his career Lee had done just about everything but yesterday he did something that was a first for him.  Lotte was losing 8 to 6 to the Samsung Lions in Daegu going into the top of the ninth but rallied to score three runs off Oh Seung-hwan to take the lead.  In doing so, however, the Giants ended up pinch hitting for their catcher, Kang Tae-yul.  This wouldn't be a big deal except that Kang was only in the game because the Giants had previously pinch hit for their regular catcher Kim Jun-tae and they didn't have any other catchers on the roster.

Obviously this was an issue because as Casey Stengel once said "You have to have a catcher because if you don't you're likely to have a lot of passed balls" so apparently Lee volunteered to don the tools of ignorance and be behind plate for the bottom of the ninth.  By all accounts he did well - there were no wild pitches or passed balls, Samsung didn't steal any bases off him and while there wasn't a play at the plate, there was a throw to home to keep a runner at third after a pop fly.  Despite Samsung getting runners on second and third with only one out, the Giants were able to hold on to win the game 9-8.  Someone put the entire half inning up on YouTube and you can see for yourself how well he played:

My favorite thing about this is that someone updated Lee's Korean Wikipedia page yesterday to change the first sentence to say (in Korean) "Lee Dae-ho is an infielder, catcher, and designated hitter for the Lotte Giants in the KBO League" (emphasis mine).
Here's a card of Lee from his four years in Japan - his 2013 BBM Buffaloes team set card (#Bs50): 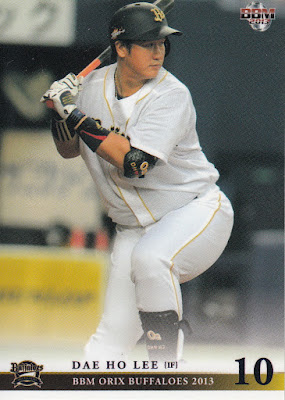