Size: 372 cards numbered 1-336, CB01-CB36
Cards Per Team:  28 (team card, manager + 26 players)
Team Card Theme:  Spring Training
Number Of Leader Cards:  N/A
Checklists:  None
Subsets:  Cross Blossom (36)
Inserts:  Japonism (12), New Age Stars (12), 3D Cross Blossom (12, #'d to 25), Cross Foil Signing (12, #'d to 15)
Memorabilia Cards: Jersey cards for Rei Takahashi and Munetaka Murakami.  Each jersey card is serially numbered to 200 plus a parallel patch version numbered to 30.  There is also a combination jersey card numbered to 10 with a parallel patch version numbered to 5.  There are four different types of autographed card available - "Cross Signature" (which includes a couple cards with multiple autographs - one with Roki Sasaki and Yasunobu Okugawa and the other with Keito Mori and Takaya Ishikawa), "Special Signature", "Japonism" and "Buyback Autographs".  The last features "buyback" BBM cards for four players - Takumi Kuriyama, Yuki Yanagita, Katsuya Kakunaka and Shuhei Takahashi.
Parallels:  12 regular player cards have a "secret" alternate photo version.  Another 12 have a "ultra secret" alternate photo version.  108 regular players cards (9 per team) have facsimile autograph parallels - silver, gold (#'d to 100), holograph (#'d to 50), and red (#'d to 25) - this includes the "secret" versions of the cards as well.  (I think the 1st round picks for each team are included in the 108 players.)  74 of the rookie cards have three numbered parallel versions - "Foilboard" (numbered to 200), "Holo Foil" (numbered to 100) and "Foil Stamp" (numbered to 50).  The "Cross Blossom" cards have two parallel versions - "Foilboard" (numbered to 100) and  "1 of 1".  There is a parallel version for the "New Age Stars" (#'d to 100) and two parallel versions for the "Japonism" inserts - one is numbered to 100 and the other is "1 of 1".
Notable Rookies: Roki Sasaki, Yasunobu Okugawa, Keito Mori

BBM published their annual 1st Version set about a month ago.  This is their flagship set and their biggest set of the year.  For the sixth consecutive year it has a base set of 372 cards - 324 "regular" cards for the players and managers (27 per team), 12 team checklist cards and 36 cross set subset cards (more about those later).

My photo selection complaint has basically been that there are WAY too many photos of "pitchers pitching, batters batting and catcher catching".  To be fair, it's not just BBM that's had this problem - Calbee and Epoch have been guilty of it as well.  But for this set BBM appears to have gone back to having much more interesting photos.  There are photos of players fielding, base running, getting congratulations from team mates and even just standing around.  There are still "pitchers pitching, batters batting and catchers catching" photos but they don't seem to be as dominant as before.  Here's some example cards - it was a struggle to just pick seven:

In fact there was one player's card in particular that let me know that things had changed:

You may not think that it's that interesting of a photo but compared to what Despaigne's cards have looked like over the past six years, it's a significant change.

And here's what the card backs look like - basically like every other recent BBM 1st Version set's card back:

I do still have my second complaint - the set's not big enough.  The problem is that there are only 26 players per team in the set and all the newly drafted non-ikusei players are included in that 26.  So for a team like the Lions who picked eight players in last fall's draft, there's only 18 cards for established players.  As a result, guys like Ernesto Mejia get shut out of the set.  I'd really like to see them go back to 35 per team but it's been 10 years since they've had that many (although Epoch's NPB set has had that many the past two seasons).

The team checklist theme for the fifth year in a row is basically "Scenes From Early Training Camp".  None of the photos really stand out but I still like these more than the ubiquitous mascot cards:

BBM has been doing a cross-set subset in at least their 1st and 2nd Versions sets in nine of the last eleven years.  This year's theme is "Cross Blossom" and features 36 players (3 from each team) super imposed over a background of cherry trees and blossoms:

The backs of the cards show the original photo: 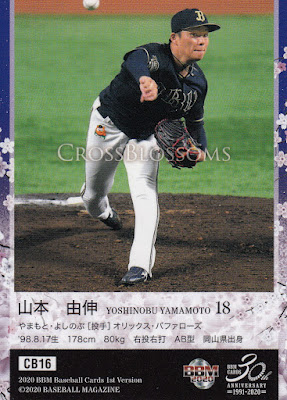 I haven't been a huge fan of these but I must say that this year's cards are much more attractive than some of the earlier "Cross Whatever" cards.  They at least have a very Japanese feel to them.

I expect that the 2nd Version set when it is published in August will feature another 36 "Cross Blossom" cards.

The set I picked up included the "New Age Star" insert set.  This 12 card set includes one young player from each team, including six rookies.  What's kind of interesting about this set (and helps prove my earlier point about the set being too small) is that five players in the set don't have cards in the 1st Version base set - Ryusei Satoh of the Lions, Yoshiaki Watanabe of the Eagles, Ryo Ohta of the Buffaloes, Kota Yamashita of the Giants and Yukiya Itoh of the Baystars.  Odd that BBM thought they were significant enough players to include in an insert set but not significant enough to be in the regular set.

As always you can see all the cards (including insets, parallels and "secret" versions) over at Jambalaya.  Ryan wrote a post about this set last weekend and I got much of my information about inserts and parallels from it.
Posted by NPB Card Guy at 8:44 PM

So what you're saying is that the Takaya Ishikawa and Roki Sasaki Cross Blossoms autos are the only worthwhile cards to chase in this product. Got it.

I commend you on your remarkable ability to read between the lines...:-)

Its encouraging to see that BBM is also getting a bit more variety in its photos again.

I love your blog and the info on Nippon Baseball. I'm just now getting into Japanese baseball and I love the cards you're posting. Thanks.

Thank you! Glad you're enjoying it.

Hi! I have never bought any BBM boxes before and would like to grab one. Is there a particular box in the $300 or less range that you would recommend?