Dan and I were messaging back and forth via Facebook last night (well, last night -Tuesday night - for me while it was Wednesday morning for Dan in Korea) about some Japanese cards he had recently acquired.  One of the cards was Hideki Matsui's rookie card from the 1993 Kanebo Gold Card set that Dan thought was actually a BBM issue (I'll explain why in a minute).  I realized that while I've shown Kanebo cards on occasion I've never done a post specifically about them.

I frequently describe the Kanebo cards as being similar to the "Action Packed" cards being issued in the US around the same time.  I realize that expecting readers to be familiar with a somewhat obscure card issue from over 25 years ago is perhaps not a great idea so let me explain further.  The Kanebo cards are kind of 3D-ish in that the player's outline on the card is raised up from the rest of the card.

Kanebo's first set in 1993 contained 64 cards.  It was sold in packs that I think had one card packaged with a piece of gum.  From what I can tell from the "Perfect Guide" I think it was issued in two series of 32 cards.  The two series look the same except that the first series cards have a "1992 Diamond Collection" logo in one of the lower corners while the second series cards have either a team logo or a "1993 Golden Rookie" logo.

As you'd expect with six teams and 64 cards, the cards are not split evenly between the teams.  There are 13 cards each for the Swallows and Tigers, 11 for the Baystars, 10 each for the Carp and the Giants and 7 for the Dragons.  The manager for each team is included in the set.  The players in the set include most of the big CL stars of the time like Atsuya Furuta, Hiromitsu Ochiai, Tatsunori Hara, Kazuhiro Sasaki, Takehiro Ikeyama and Kazuyoshi Tatsunami.  There's also a significant number of foreign players - Jack Howell, Tom O'Malley, Jim Paciorek, Rex Hudler, Glenn Braggs, Jesse Barfield, Lloyd Moseby and Bobby Rose.  Plus R.J. Reynolds has a cameo appearance on Atsuya Furuta's card.  The full checklist for the set is available at TradingCardDB.com.

I only have a handful of cards from this set.  Here they are: 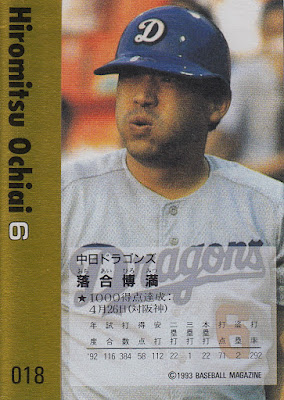 You may have noticed two interesting things about these cards.  The first is that there's a copyright line for 'Baseball Magazine" on the back of the card.  The second is that the name "Kanebo" doesn't appear on it anywhere.  You can understand why Dan thought that this was some sort of BBM issue.  I don't know for sure but I think the copyright line has to do with the photographs on the cards - I'm pretty sure I've seen Epoch cards with a "Baseball Magazine" copyright.

The 1994 set was only 32 cards.  From the ad Kanebo had for their 1994 cards in the "Perfect Guide" it looks like they had originally intended to issue the cards in more than one series again but the second series was never published.  The 1994 set is dominated by Swallows (9 cards) and Giants (8 cards) with there only being four cards each for the Baystars, Carp and Tigers and just three for the Dragons.  Furuta and Ochiai appear in this set as well along with other stars like Akira Etoh, Tsuyoshi Shinjyo, Masahiro Yamamoto, Takuro Ishii and Masumi Kuwata.  There's only a couple of foreign players - Howell, Rose, O'Malley and Alonzo Powell.  The checklist for this set is also available at TradingCardDB.com.

This set appears to be much rarer than the 1993 version.  I used to see cards from the 1993 set show up on Ebay every so often (although I can't remember when the last time I saw any) - in fact I think I got all of my 1993 cards from there.  I'm pretty sure I've never seen one of the 1994 cards there however.  I only have three cards from the set and I know for sure I got two of them in Japan (the Komada I got at Biblio in 2013 and the Nomura I got at G-Freak last June) - I'm not sure where I got the Ishii:

Here's what one of the card backs looks like: 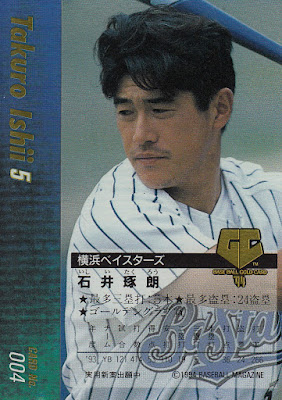 Kanebo also issued a 160 card "Gold Card" set for the J-League for the 1993-94 season.  Other than the fact that they exist (and all the cards can be seen in the "Perfect Guide") I know nothing about the set (mostly because it isn't a baseball set).  I have no idea why Kanebo apparently abruptly stopped issuing baseball cards after their 1994 set.  As always I'd love to hear the reason behind it.
Posted by NPB Card Guy at 9:39 PM

I don't know much about the back story, but I am quite curious about how Kanebo ended up pairing up with Topps for that 2003 set, after going almost a decade without making cards. I remember those Topps/Kanebo cards being sold in Convenience stores that year.

The 1993 Kanebo Gold set is actually a 69-card set, because 5 of the 10 Yomiuri Giants player cards have 2 versions: old uniform and new uniform. I have updated the checklist on TCDb.com accordingly. Also, Kanebo is a rather huge cosmetics company instead of a confectionary company (it just tried to “embrace diversity” in the 90’s…and failed): https://www.kanebo.com/history/

Thanks for the info - is the Hara card I have the old uniform or the new uniform? I'm guessing the old one since it doesn't look the same as Nagashima's uniform (two stripes on the pants rather than one for one thing).

And I had no idea that Kanebo was a cosmetics company!

Yes, you are right about the stripes: you have the old uniform version. Just uploaded the new uniform version to TCDb.com for you to check: https://www.tcdb.com/ViewCard.cfm/sid/94884/cid/17431819/