UPDATE 7/22/19 - Please check my "Card Shops in Japan" page before planning a trip to any of these stores to verify that they are still where they were when I visited.

Jinbocho is neighborhood in Tokyo's Chiyoda ward that is world renown for it's bookstores.  On the corner of a couple unnamed streets here is a small bookstore called Biblio that's packed to the gills with baseball books and memorabilia.  And some binders of vintage baseball cards.  Rob Fitts recommended this store to me and a couple other people echoed his recommendation. 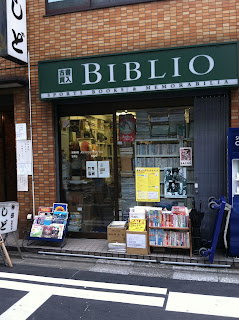 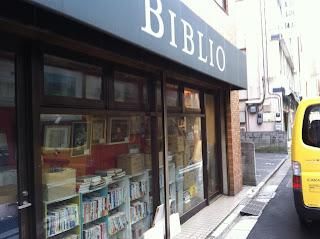 The store has so much stuff that it overflows the shelves.  There are huge stacks of books, magazines and newspapers on the floor, making it extremely difficult at times to move around in the store.  Beyond the material on Japanese baseball (including college and high school) there were books on American baseball and boxing.  They don't have a lot of baseball cards, but what they have is pretty incredible.  Lots of vintage cards from the 1940's and 1950's.  They also had binders containing Calbee cards from the 1970's to 1990's and a handful of other cards from later.  There was also a binder containing all autograph cards.  I also noticed some autograph pictures up by the counter - the one off hand that I recognized was Kaoru Betto. 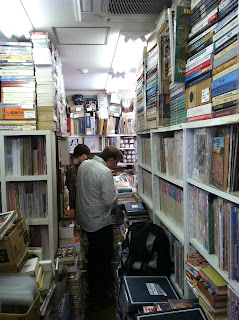 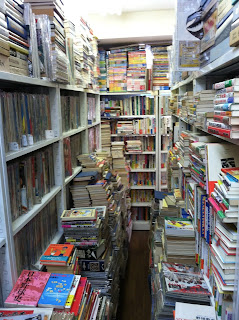 I met up with Ryan at this store around noon on Monday and we had a great time here.  There were two people working the store - a man and a woman and the woman spoke very good English.  It was great getting a chance to ask some questions that I had about Japanese baseball history, like what did Katsuya Nomura's wife do to get him fired as manager of the Nankai Hawks in the 1970's.*  What the woman didn't know, she asked the man who was there.  And despite the apparent disarray of the store, I got the feeling that the man knew exactly were everything at the store was.  I asked about books or magazines about stadiums - he was able to direct the woman to a couple books in a particular stack (although ultimately I didn't end up getting any books).

*So as I remember and understood what the lady at the store said, Sachiyo was riding on the bus with the players and "causing unrest" between them and Nankai.  We agreed that Sachiyo was not terribly pleasant person.

I ended up not picking up a lot here - not because they didn't have anything I was interested in but because they had TOO much.  As I said to Ryan, once I would get started on the vintage cards, I wouldn't know where to stop.  I traded the remainder of the cards that I had brought to Japan (a bunch of 70's - 90's Calbee and some Yamakatsu cards) for 3000 yen of store credit.  I used the credit to pick up three of the cards that I showed here - the 1989 Lotte Kadota, the 1994 Kanebo Komada and the 1950 bromide card of Nagatoshi of the Nishi Nippon Pirates, so I actually spent no money here.

I considered stopping by here again on the day I was leaving, but I was too paranoid about missing my train to the airport to venture too far away from Tokyo Station.  This is definitely a store I would go to again, but I'd make sure I had a lot more time.  And taking Engel's Vintage Card Guide to this store is a must - Ryan and I made extensive use of it there.  If I could read Japanese, I'd probably never leave this place.

UPDATE 8/23/20 - Mint Kanda has shut down and reopened as a completely different store called Mint Lab Tokyo in Nihonbashi.

Just a couple blocks away from Biblio (and almost literally in the shadow of Meiji University) is another Mint store, Mint Kanda. 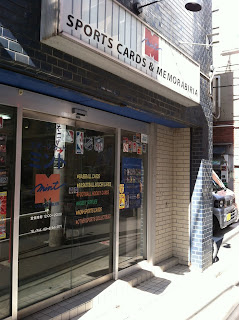 Mint Kanda is pretty much a run-of-the-mill card store from what I can tell and there's nothing wrong with that or it.  They had singles for most of the BBM issues and they were pretty well organized.  They had most of the recent products available in either pack or unopened boxes.  They had some opened box sets pretty cheap and they had a handful of other BBM sets available - I was able to pick up the 2005 Hanshin Tigers 70th Anniversary set for 1000 yen.  I also bought some singles that I was looking for - I spent probably 1500 yen in all there. 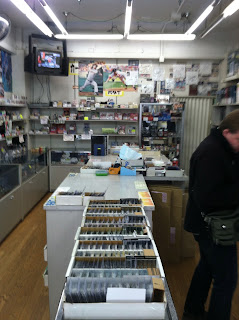 Not sure what else to say about the store - it's a card store.  The guys working at the shop were helpful. Ryan and I probably spent 30 to 45 minutes there.

Wrappers is another store that Rob Fitts told me about.  It's located on the other side of Showa Dori than the area around Akihabara station.  UPDATE - Wrappers has moved to a new location in Jimbocho not far from Biblio and Mint Kanda. 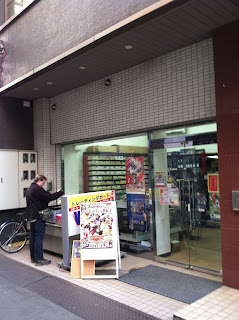 Wrappers is a great store.  They've got a huge collection of singles including almost all the BBM issues and Calbees as well as the Upper Deck issues (including the 2000 Upper Deck Japan Olympic team set).  They are organized extremely well.  They also have opened box sets starting around 500 yen - I picked up the 2011 BBM Farewell and the brand new 2013 BBM Greatest Games 10-22-1973 sets here.  I considered picking up the 2007 BBM Home Run Chronicles set for 1000 yen, but I ultimately decided that I just wasn't that interested in it.  They had cases with autographed and memorabilia cards and a lot of complete sets. 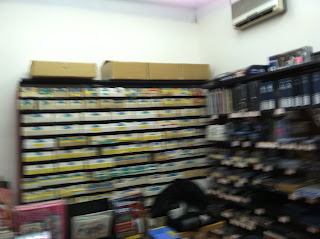 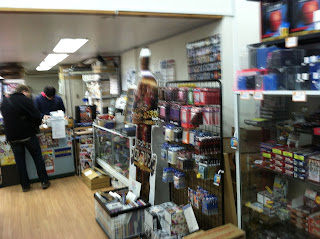 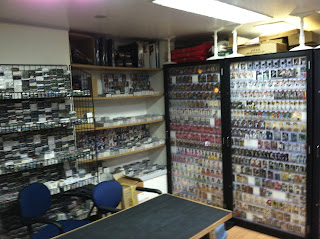 My pictures came out a bit blurry so I'm not really giving the store justice.  They seemed to me to have an incredible variety of single cards, as good as the selections at Quad Sports and Mint Ikebukuro.  Ryan and I probably spent an hour or so going through cards here.  Ultimately I think I spent in the neighborhood of 4000 yen here.  We didn't really interact with anyone working at the store here, so I can't say if they're helpful or not.  On the other hand, the store is so well organized, I didn't really need any help.

The last store I went to in Tokyo was the Mint Akihabara store.   This store is on the fifth floor of a building on the corner of Chuo Dori and a little unnamed street.  It's kinda-sorta part of a store called Yellow Submarine that specializes in anime and idol cards.  UPDATE - It's still part of Yellow Submarine but it's moved one block east to the sixth floor of the Akihabara Radio Hall building.  Note that the link I've got is to another store in that building.  Here's the map and address from Mint's web site. 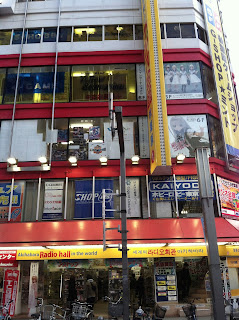 Based on the descriptions of the store from both Ryan and Deanna, I really wasn't expecting much from the store.  And to some extent, the store met my expectations.  There was really not a whole lot of cards and certainly no organized boxes of singles to do set building from.  On the other hand, they had some odd ball items that were kind of interesting.  They had mid-70's Calbee cards which kind of surprised me.  They also had a bunch of opened OB club box sets for something like 100 yen a piece, the cheapest I had seen anywhere.

They also had a bunch of 1997 Takara cards, probably the only store that I really saw much in the way of Takara.  They had so much 1997 Takara, in fact, that they were practically giving it away.  I can't remember the prices on the team sets, but they were pretty low.  They also had a box that had all 12 of the team sets in it for something surprisingly low - low enough that I briefly considered buying it.   I had not realized that there was anything that resembled a factory set for all the Takara sets.  Looking at this box, I was able to confirm something that I had wondered - all 12 1997 Takara sets included a card of the team's manager.  Engel's checklist book does not list these. 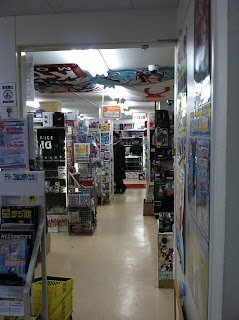 Ryan and I didn't spend a whole lot of time here.  The store suffers from the same problem that G-Freak has - nothing's organized.  Although since they have a lot less stuff than G-Freak, you can browse a lot faster.

I ended up spending around 1000 yen on a couple Calbee cards.  (And with Ryan's help, I was able to locate something for my anime-crazed teen age daughter here.  The store clerks were very helpful in trying to track down anything they might have from the TV shows she was interested in.)
Posted by NPB Card Guy at 5:18 PM

That first store your described sounded like my kind of store! Crazy "organization" and friendly/talkative shop keepers. Cool find!

I found a site with checklists for all of the 1997 Takara sets:

Each set has the manager listed. As I find uniform numbers for them, I'm adding them to the checklists at SCF.

Does anyone have the web address for Wrappers?

I took a look at the last issue of Sports Card Magazine from last winter. The entry for Wrappers in the card shop listings does not have a web site.

Please note that Wrappers is no longer in Akihabara. They have now moved to Jimbocho into the 6th floor of a hard to find building.
https://medio.bz/shop/wrappers/

Thank you so much for the update on Wrappers. I wish I could see their Website in English. I love this store. Do you know their email address?

Thanks for the update. I know that a couple of the other stores that I went to in 2013 have moved. I believe that Mint Akihabara moved into a new space in the same block they were in before and Mint Yokohama moved into a shopping mall just south (well, south-ish) of Yokohama Station.

Wrappers' website doesn't have much beyond their hours, their address (with Google Map embedded in the webpage) and their phone number. No email address.

I haven't really talked about this on the blog but I'm making another trip to Japan in May so I'll be doing new posts on card shops in Japan when I get back.

Really looking forward to your new post. Didn't find much relating to sports cards in Kobe and Osaka this year, except for smallish Mints in both with very few singles each.

Wrappers is still my go-to place.

Thanks! I updated the link I had for the store.

I'm planning on hitting the Mint store in Osaka (Mint Umeda) but Ryan has told me not to expect much from it. Sounds like you agree with him.