Card Of The Week September 26

20 years ago today, the Osaka Kintetsu Buffaloes clinched their fourth and final Pacific League pennant when pinch hitter Hirotoshi Kitagawa hit a walk-off grand slam in the bottom of the ninth against the Orix BlueWave, turning a 5-2 deficit into a 6-5 victory:

It had been 12 years since the Buffaloes had last won the pennant.  They fell to the Swallows in the Nippon Series in 5 games and three years later the team ceased to be, "merging" with Orix to become the Orix Buffaloes.
Kitagawa's home run has been featured a couple of times in BBM sets.  It was included in the "Great Records & Highlights" subset from BBM's 20th Anniversary set in 2010.  The entire game was featured in the third installment of BBM's "Greatest Games" series back in 2013.  The first card ever to show the home run (or at least Kitagawa celebrating it) was his card in the 2002 1st Version set (#194): 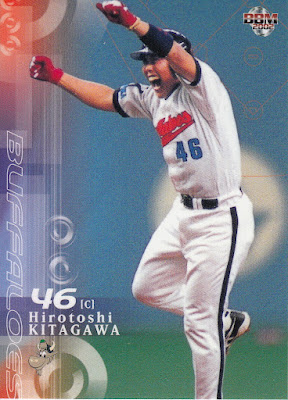 BONUS - While looking for Kitagawa's cards today I discovered that he had spent the 1996-97 off season playing for the Hilo Stars in the Hawaiian Winter League. 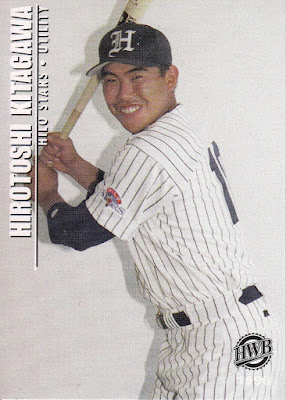